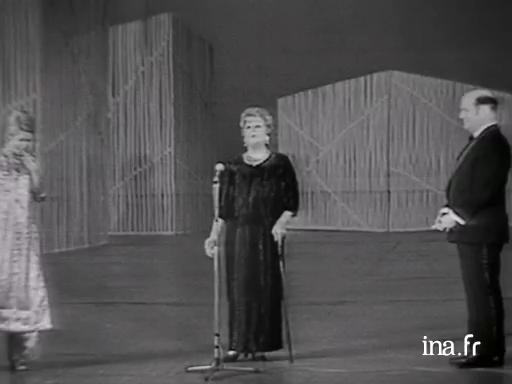 In front of the La joie de vivre show's audience, at the Chatelet theatre, Romanian actress Elvire Popesco recalls how she came to Paris in 1923.

Elvira Popesco (Bucharest, 1894 - Paris, 1993), Romanian-born actress, has been a member of the National Bucharest Theatre for 20 years. The dramatic author Louis Verneuil invited her to Paris in 1923 to playMy cousin from Varsovia,which would be performed over a thousand times. The queen of vaudeville and nicknamed "Our Lady of the theatre", she worked through her career on texts by Bernstein, Deval, Roussin, Cocteau. Her foray into cinema is less well known about, but she played in around thirty films. From 1956 to 1965 she managed the Théâtre de Paris, then the Théâtre de Marigny.

At 84 years old, the one they call "the volcano", always hard at work, took up her role inLa Mamma, written for her by André Roussin in 1957. Until the 1980s the salon she kept at her house in Mézy-sur-Seine and then on Avenue Foch, was frequented by several celebrities such as Sacha Guitry, Pierre Cardin and Jacques Chirac.

In 1987 she received a Molière prize for her life-time work and in 1989 she was awarded the Légion d'Honneur.

I'd like to tell you that it brought joy to my life. For forty years, I worked with a lot of respect and tenderness for all of you. So, it's to you that I owe my joie de vivre.
[Applause]

Of course, without my colleagues, without the authors, I would not have had my career. So, I will start with Louis Verneuil, with Sacha Guitry and with Mr. Henri Bernstein. And with all my colleagues who are no longer with us, so I have for them very fond and very grateful thoughts. Now, at the end of my career, I have authors who have given me the greatest success such as Mr. Jacques Deval, Mr. Andre Roussin, Mr. Druon, Mr. Achard and Mr. Dard. From my heart I wish them all much success for us to enjoy.
Applause

I believe Madame that you always get along very very well with the authors.

Always very well. When you are successful, you get better at many things. Only during rehearsals, you are torn, you are miserable, you are very nervous to re-establish your role. So they give you lots of nicknames. I know what mine is. Mine was it seems "lucky charm". It's true, I brought them luck, they have had lots of success but I kept my other one, "pain in the arse".
[Laughter and applause]

But Madam, you spoke about your forty years spent in Paris, how did you come to be in Paris? I believe that it starts with the story of a telegram?

I received a telegram from Bucharest, it was Mr. Louis Verneuil who had spoken to Robert Desfleurs who knew me and who saw me perform in Romania.

No, no, stop a moment, let's sort this out, you know how ten years ago when we didn't do the programme, it's normal for you to have little problems like that at the start.

Ah, very well, I'll carry on. In Bucharest, I received a telegram stuck to a newspaper. [NOT UNDERSTOOD] it was Louis Verneuil. Robert Desfleurs who saw me play in Romania had said to him "there's the actress you must have". Another telegram from New York to play "The Madonna" [NOT UNDERSTOOD] As I knew Paris and France since my earliest childhood, and which I adored, I opted for France and I played "My cousin from Warsaw", there you are.