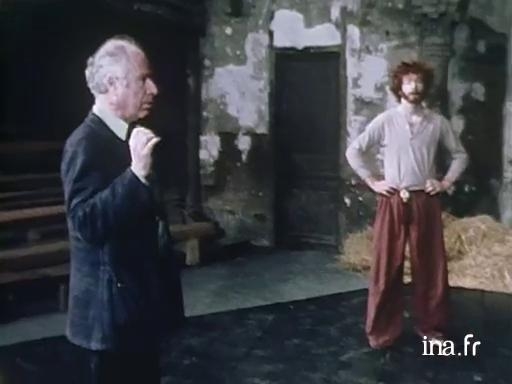 Conversation with Peter Brook regarding the Bouffes du Nord theatre, where he and his company have settled. According to him, it's an extraordinary location because it has a soul.

Peter Brook, born in London in 1925, started a brilliant career as a cinematic director at 18 years old. Following the example of Vilar and Strehler, he participated in the renewal of the European post-war stage, with Shakespeare texts and those of other contemporary authors like Sartre, Anouilh, Shaw and Miller.

In 1955, he met success outside Great Britain withTitus Andronicus. In 1962, during the rehearsals ofKing Lear, he decided to separate himself from the theatrical world and discovered the value of "The Empty Space". From then on, his work would mainly be based on actors' presence. He began theatrical research which led to the creation of the International Centre for Theatre Research after Jean-Louis Barrault invited him to lead an international workshop in Paris in 1968, where he moved to 1970. Then followed three years of travelling in Iran, Africa and the United States during which he applied himself to creating artistic methods of communication between the distant cultures.

In 1974 he reopened the neglected theatre Bouffes du Nord withTimon of Athensby Shakespeare, a place that he still works in. This space in ruins, neutral but not sterile, left Brook and his team the freedom to experiment with playful pleasure and the readability that characterises his theatrical approach. At the Avignon Festival in 1985, he put on theMahabharata in open air, the mythical Indian epic that lasts nine hours and remains one of the greatest performance successes of all time.

It's from silence with a true listening quality, because all that is not very convincing. It's not the difficulty of doing things by halves, we do that in actual practise for ourselves. Exclusively with words, exclusively with text.

Peter Brook, Les bouffes du nord theatre, it was nothing more, it was said that it was a warehouse, it was a storeroom with I no longer know what. And then there was love at first sight, is that it? How did that happen?

I'd been working on my films for years, and one beautiful day, it was Micheline who discovered "Les bouffes du nord", who said: "there's an extraordinary place, you have to see it". So we went together, we came in here into the dust, and we saw,

Was there something there?

And the most precious thing, most difficult to define, to explain but which was very real, which was a place which had a soul. It had all kinds of things for the size of the place, and also for the fact that this place was, it carried its wounds very openly. You can see all that this place has lived though and even suffered. So we said to ourselves that there was nothing else for it, we had to find a way to get this place, to make it habitable.