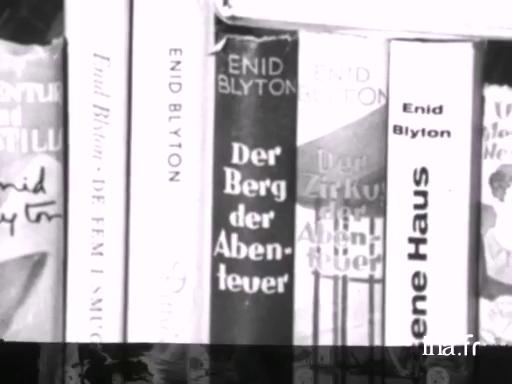 Interview with British novelist Enid Blyton, the queen of children's literature, in her English cottage.

Enid Blyton (1897-1968), an English novelist, specialised herself in children's literature right from the beginning of her career.

She taught for a few years before dedicating herself completely to writing. The publication of the first volume of the popular Famous Five series, written between 1942 and 1963, made her famous worldwide, especially in France, which continues to publish the 21 books of in the Bibliothèque Rose series since 1954. She tells the story of a group of four kids, Claude, Annie, Mick and François and their dog Dagobert, who are in charge of solving police enigmas. Later on, between 1942 and 1963, the Secret Seven, made up of fifteen stories, also encountered much success.

Her books, translated into more than fifty languages, have sold over 400 million copies. The Oui-Oui series, which started in 1949, is destined for much younger readers, who are learning to read. She has been accused of writing without style and of portraying an over-simplified world, but it has to be said that her works have allowed many young children to become interested in reading. Enid Blyton wants to reinforce children's talent for reading while allowing them to discover the world around them, thanks to exciting stories that are full of twists and turns.

These books bring joy to our children, girls and boys. But who is Enid Blyton, the bestseller of the new Bibliotheque Rose? I often thought that hiding behind this feminine and British signature was an old man, bearded and decorated with the Legion of Honour. Well, no. Enid Blyton is indeed a woman, and she is indeed British. Jacques-Olivier Chattard found her in a cottage that is also quite English where, for once, she opened the door for television cameras (since she usually flees from attention), which allows us to present to you the author of these children's novels that are translated and published throughout the world, into millions and millions of copies, for example the Famous Five series or the Secret Seven series. In short, one of publishing's phenomenons, someone like the new Countess of Ségur.
(Music)

Miss Blyton, do you know how many books you've written?

Miss Blyton, how old were you when you first started writing?

[English] They weren't at all stories like the ones I write now, but sure enough, I was writing.

And you haven't stopped writing since. Do you write whenever inspiration hits you or do you have a rigourous work method?

[English] I just sit in my armchair with my typewriter on my knees, my hands on the keys, I start to write and I immediately write the book.

How long does it take you to write a book?

Miss Blyton, to sum things up, you have a powerful imagination and the capacity to work that famous writers such as Balzac or Dickens have. Where do you rank yourself within contemporary literature? Do you consider yourself to be a great writer?

[English] No, I consider myself to be a good children's author.

What hobbies do you enjoy when you're not working?

[English] I like gardening. I spend lots of time in the garden. I like golf, tennis, playing the piano. That's enough, I guess.

Miss Blyton, do you think that to please children, you have to describe a world where there's only children?

Do you get letters from young French readers?

Do you have one that you could read to us? [English]

[English] Yes, I think that I have one that I received today. [English]

My french is not good. "Dear Enid Blyton, the first time that I read one of your books, I had a good time. The mysteries are very interesting. The Famous Five and Secret Seven stories are always exciting adventures. Claude, Annie, François, Nick, Jo and Dagobert have practically become friends of mine. I thank you for these stories. I have many books of yours. I would be very happy if you would be so kind as to sign one of my books. I sent you my warmest thoughts. Michèle Dino".

Well, I hope that our viewers, and especially those that are under 14 years old will have the pleasure of discovering Enin Blyton, whose novels are published, once again, by Hachette.
(Music)