Fellini and Mastroianni, regarding the shooting of Ginger and Fred 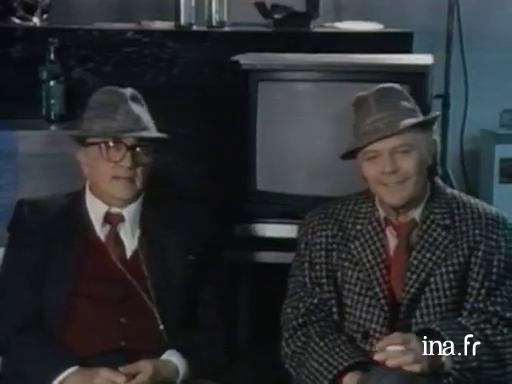 Fellini and Mastroianni shoot Ginger and Fred. Federico Fellini speaks about cinema-television relations; he believes that television has changed the relationship between the public and the screen; he delivers an analysis of the impatient and scattered "new spectator".

An integral part of Federico Fellini's (1920-1993) work, the never denied fascination of the Italian master for show business and for illusions make him gradually stray away from the neorealism that was always present in his first masterpieces, such as I Vitelloni (1953), La Strada (1954) and Il Bidone (1955). From La Dolce Vita (1960) on, where the filmmaker, more provocative than ever, found within Marcello Mastroianni his double in front of the camera, his art illustrates his fantasies and his frustrations as a creator.

Abundant, dreamlike and autobiographical, deliberately ignoring the traditional spirit of narration, his films, like 8 1/2 (1963), Amarcord (1973) and City of Women (1980), hide an unbearable fear of death behind the caricature of the outline and the nostalgia in certain scenes. This seriousness - present in works as diverse as Satyricon (1969), Roma (1972) and Casanova (1976) - is an integral part of Ginger and Fred (1985) where Fellini renews with his favourite stars, Mastroianni and Giulietta Masina, to better denounce the inescapable hold of television.

A month ago Fellini's film Fred and Ginger came out. In 48 hours, it's being shown on channel five. Two good reason to listen to the maestro explaining the cinema and television reports.

What have you seen, I've devoted myself to looking younger? That was terrible... No, that's yours. All films are autobiographical. This question that you never stop asking is ridiculous. We are always autobiographical. Even when you claim you are being objective, detached, that's just an appearance of detachment. Supposed objectivity.

Television is making its presence felt, generally at the expense of cinema. It must therefore be a question of something real-life.

How this film can be autobiographical, always in its jokey tone, is in its certain dissatisfaction, in its regrets. I think that without really being responsible, television has changed the relationship between spectator and image. It's no longer a relationship based on suggestion, trust, stimulation which the big screen created, around which the audience gathered, as if in a church. The lights went out, this huge screen lit up. The actors, huge, with their enormous faces... And these mysterious places, this whole exotic appearance, the feminine appearance, the woman, television has irreversibly erased all that. It's no longer the same image at all. It's a schizophrenic, psychedelic, neurotic, "shredded", dispersed image, A sort of kaleidoscope... It irritates the eye and you end up with impatient, superficial spectators, who want to make the film themselves, by skipping constantly from one programme to another. And evidently, me, as a film director, who has formed a certain concept of the cinema, I must take into account an audience that I don't know. I have to tell my stories, express my fantasies and my ideas in a language which takes into account the demands of " insects", of this new frenetic, impatient audience. I will say no more!