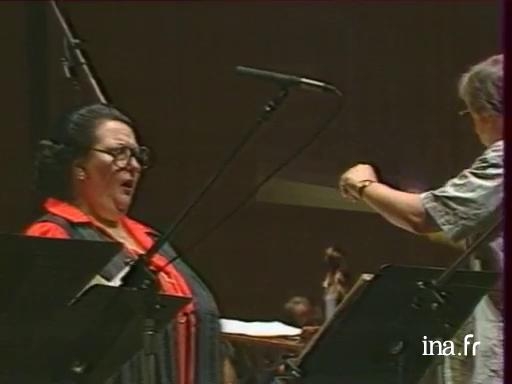 Final rehearsals of Haendel's Julius Caesar at the Pleyel hall. Montserrat Caballé plays Cleopatra's role, and confides in her love for Parisian audiences.

Born in Barcelona in 1933, to a poor family, she studied in that city's conservatory. She made her debut in 1956. She sang Puccini, Verdi, Donizetti, Rossini then Richard Strauss, whose Salome would remain her favourite role. From the 1960s onwards she had global recognition. Health problems did not damage her glorious career. In her repertoire she had over 80 opera roles, without forgetting recitals of more rare works or Spanish zarzuelas (operettas). One of her discographic successes is a rock recording of a duo with Freddie Mercury. She started a charitable foundation in Barcelona.

Her voice, with its rare beauty is very homogenous high notes will remain legendary. On that point, as for her acting capabilities, she was compared to Maria Callas, but the names of these two great divas of the 20th century will remain linked to the rediscovery of the romantic bel canto repertoire.

You can always try, but I would be very surprised if there was a single seat left, tonight, at the Pleyel hall in Paris. In fact, on the programme, is Haendel's Julius Caesar with Radio France's new philharmonic orchestra, an orchestra conducted by Ralf Weikert, a good programme, improved once again in addition, by the presence of Mrs. Montserrat Caballé. 20 years ago, Montserrat Caballé made her debut at the Paris Opera. Today, she will receive the insignia of the Commander of the arts and letters, and, of course, Jean-Claude Darrigaud participated in the last rehearsal.
(Music)

A flawless career path from the Metropolitan to the Scala, from Covent Garden to the great Parisian halls, Montserrat Caballé with Radio France's new philharmonic orchestra. She plays Cleopatra in Haendel's Julius Caesar. For Montserrat Caballé, tonight's concert is an intense moment, an anniversary marked by emotions.
(Music)

It's a great love that's born here, and that's already lasted 20 years. I also hope that in the future, when I don't sing anymore, that I'll come to Paris very often, I'll also be able to come to the Pleyel hall, to see the others, tomorrow's debutants, the big stars of tomorrow, the prestige of the music, to see them start, as I once started. The audience, they were fantastic, and I'm sure they'll be fantastic with the others as well.
(Music)

An award, or rather recognition, Montserrat Caballé was made, today, Commander of arts and letters by the French minister of culture.
(Music)