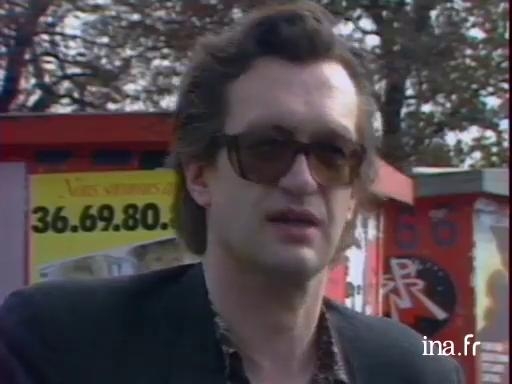 Conversation with Wim Wenders, three years after winning the Golden Palm in Cannes, now in Paris to present his new film Wings of Desire, a poetic and philosophical tale in a divided Berlin.

Wim Wenders, born in 1945, is a major and symbolic figure of German and European cinema. After his film studies in Munich, in 1970, he directed his first feature-length film, Summer in The City. Wandering about, incommunicability, lack of roots: these themes and stakes were already present in the film and were an indication of future works, which was demonstrated, in addition to The Goalkeeper's Fear of the Penalty (1971), by a triptych made up of Alice in the Cities, The Wrong Move and Kings of the Road, between 1975 and 1976.

The following films increasingly questioned the relationship America had with film-making. The American Friend (1977), Nick's Movie (1980), Hammett (1982) and The State of Things (1982) led to the creation of Paris, Texas, Wenders's first genuine triumph, which earned him a Golden Palm in Cannes in 1984. 1987's Wings of Desire, based on a script by Peter Handke, gave viewers a new and poetic look at Berlin. From the beginning of the 1990s, Wenders was less inspired but scored another hit with both critics and viewers with the Cuban music film, Buena Vista Social Club, in 1999, and with the 2003 blues film The Soul of a Man. This return to form was confirmed by 2005's fiction film, Don't Come Knockin'.

Wim Wenders, does that ring a bell? Maybe not. And "Paris, Texas", Golden Palm at the 1984 Cannes festival? You've got it, this time. Well, for 3 years, the German director, as if frozen by his success, hadn't done anything else. And then, inspiration returned. Wim Wenders releases "Wings of Desire", a film shot in foggy Berlin, a film about the taste for life. Nicole Cornuz-Langlois met with Wim Wenders in Paris.

This man in the city, it's director Wim Wenders. He travels the world like his characters, wandering in search of someplace where there's more justice.

That is a place where they can go to. So they move, they advance. Me, I truly believe in movement to get somewhere, to advance.

In "Paris, Texas" then, the traveller without illusion comes out of nowhere in the desert to try to reach the life referred to as hostile.

The taste of life, you have to find it, you have to invent it. Myself, I've invented it little by little, and I also believe in my films.

And in "Wings of Desire", the angel leaves the heavenly world to find the taste and the colours of the earthly world once again. In front of the Berlin wall, it's a challenge. A second birth and no deadline.

He can start to live. The price is very expensive. He has to give up eternity, but he finds that it's worth it.

Wim Wenders's optimitic vision, this angel has the innocence and the courage of a child. He regains salvation thanks to love.

The child's vision, so to speak, is also the ideal view of cinema. That would be the ideal view of cinema. It seems to me that the view of love that we're used to receiving, is quite negative. Usually, it means that it doesn't work. Forget about it. It's sad. It's a hassle. So then, by giving an image or images of love, where love works, it might be important. It's not going to change the world but it can change the image people have in their heads. That is the power of cinema.