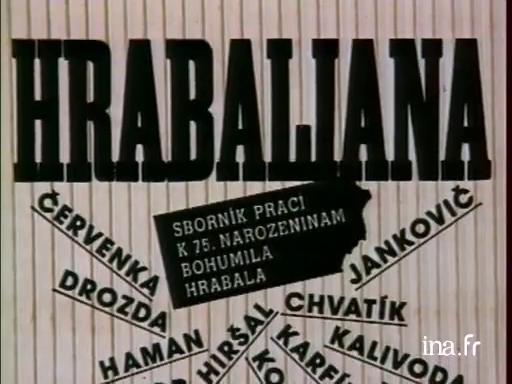 The Plasticien Jiri Kolar talks about his friend, the Czech writer Bohumil Hrabal: his beginning, when Kolar had helped Hrabal to publish his first collection, his passage from poetry to prose, their common taste for the painter Bruegel and an analysis of the Hrabal style.

Bohumil Hrabal was born in Brno in 1914 and died in Prague in 1997. After having worked in several professions, he published his first collection of short stories in 1963, at the age of 49; it was immediately successful. But after the reinforcement of the Czechoslovakian communist regime in 1968, after the Prague Spring's repression, Hrabal was forbidden from publishing, accused of being "disgusting and pornographic".

Some of his books, written during this time, nevertheless circulated underground, published in "samizdat" (literally "self-publishing", a small-scale and illegal reproduction system). 1976 marked a turning point: that year, a petition circulated in intellectual circles, Charter 77, which denounced the "normalisation" of the regime after 1968. In response, the communists in power produced an Anti-Charter. Bohumil Hrabal signed it, which led to his graceful return: his works were once again officially published. During the following years, he published and wrote a great deal: I Served the King of England (samizdat 1971, 1982), Too Loud a Solitude (1976), Les Noces dans la Maison (1987).

Hrabal's environment is characterised by irony, dark humour, pessimism and grotesqueness, in a style that combines slang with extremely refined language. Considered by many to be, along with Milan Kundera, the main Czech writer of the 2nd half of the XXth century, Bohumil Hrabal always refused to emigrate. In the 1980s he was censored once again, and after falling ill, he committed suicide in 1997, jumping out of the window of the hospital where he was being treated.

(Czech trans.) Flaubert wrote that he had to read two thousand books to write Bouvard and Pécuchet. I also told you that in order for Hrabal to write his great books, he needed to know - and I'm certain of this - two thousand people. That's why he's such a great, epic writer, that can even have a conversation with a dog, as they say in Czech! One day, a friend of mine introduced me… invited me to the Bibliophile Club, and he suggested I become a member. This Club published a small journal. I asked these gentlemen if they would publish the first printing of Hrabal. I explained to them who he was. It was difficult, but to my surprise, the gentlemen accepted. Obviously, they didn't have enough money. I offered to pay for the printing. I was happy to do it for Hrabal - I got his first book published - the way Halas did for me. You never forget things like that, the same way as I will never forget Bohumil. Many prose-writers started with poetry before settling with prose - that's the way I say it - settling with prose. And when Hrabal brought me his poems, I loved them, and I predicted to him that he wouldn't keep this up, that he should give prose a shot. He told me that he had already done so, that he's been writing prose for a long time. He brought me his short stories. Don't forget that at that time, Hrabal was still working, he had an epic, massive talent! You can open any one of his books and you dive right in. He also has an advantage, even though there's an ongoing story, you can start right in the middle or towards the end, you always dive in… As Josef Hirsal says, it's genuinely entertaining literature. And art should be entertaining, we should have something to look at. And along with Hrabal, we both loved Breughel's paintings, they're so rich in poetry. And, in my opinion, the fact that he started out with poetry, it stayed with him… Notice how melodic his phrases are, in each sentence, there's action, which is something very positive. You always have something to read about. He doesn't describe things too much. I read his texts as soon as he wrote them. And even though the book had just come out, I read through it and laughed just like the first time… It was always the same when Hrabal read us his manuscripts.