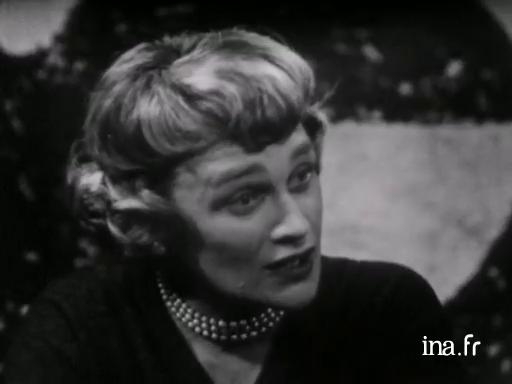 Publisher Nicole Védrès recalls her memories of Irish author James Joyce, whom she met around 1920, and who was practically unknown then in the literary world.

James Joyce (1882-1941) was one of the XXth century's most famous Irish writers. His work is marked by his origins, even though he left Ireland early on, in 1904, and then left for France in 1920. The essence of his work is made up of Dubliners (1914), a collection of fifteen short stories depicting characters negatively affected by a society that's brutal, sadistic and creates frustration, and the novels Ulysses (1922) and Finnegans Wake (1939).

His main work, Ulysses (obvious reference to Homer'sOdyssey) tells the story of a day in the life of Leopold Bloom, a small upper class man, with Jewish origins, in Dublin. Each chapter, written in a different style each time, refers to an event in Ulysses's life, but also to one of the human body's organs, a colour, an art and a symbol. Leopold represents both Telemachus as well as Joyce himself. This novel therefore contains several levels of meaning and several different interpretations. Its writing style revolutionised novels as a whole, combining work on the language as well as narrative structure.

...you knew James Joyce, you were a little girl and he was a man...

I was a little girl and I think that he was exactly 40 years old when he came home. He was brought home by someone who was his most loyal friend and greatest admirer, Ezra Pound. And now, even though we hear about Joyce and in fact, all of the avant-garde and not so avant-garde literary schools praise Joyce all the way, at that time, on the contrary, it was around 1920, no one really knew his name, maybe a little bit in Ireland, but finally Pound arrived home, while bringing Joyce and saying: "Here, he will become the greatest writer. He's already the greatest writer. You must take care of him. You must only think about him. He's the great writer of the century". And, most notably, he said that to his mother who, at that time, was translating I don't know which book. He told her: "Drop your work and translate this book that Joyce has already finished" and that was called "Portrait of the Artist as a Young Man" and which was later published under the name of "Dedalus". And when I met Joyce, he had therefore already written "Dubliners", he had... and another book that was a sort of mold for Dedalus and which was called "Stephen Hero". And later on, he wrote "Ulysses" which is, I believe, his most famous book if not the most read one because we talk a lot about him but we might not read his works as much as we talk about them. And, he died without having finished, I mean while writing "Finnegans Wake" which is his perhaps untranslatable work even though it was translated by [Welsh].

But you probably have precise memories, I mean, of a behaviour where...

Yes, he really impressed me. He impressed me, first of all, because I had been told that he was a genious. I was 10 years old, but I mean, the word "genious", when you're 10 years old, we have an idea what it means. And so, I looked at him, he was... he looked more like a poet than a novelist. He was a dandy and a damned soul at the same time. I mean, he was very well dressed in velvet things, like, a bit of a wildcat. He didn't see things very clearly. Later on, he even had serious problems with one of his eyes. And like all people who don't see very well, he heard wonderfully. He heard everything, the slightest noise would startle him, the slightest thing someone would say. Even children amused him, well, in any case, sometimes caught his attention. He had a very particular gift. I know one or two people who are like him, not more. He could say any word backwards, like Dumayet for example, he would say it right away by taking the letters in the other direction. His son who was called Georgio, he called him Oigroeg, because Georgio backwards, is Oigroeg. And we would tell him: "Springtime, what is that backwards?", he would say: "It's emitgnirps". He would say it right away, just like that. And maybe all of the language acrobatics (Jean Paris could tell us if this is true), everything he looked for also came from a particularly refined auditory sense and a desire for contradiction.

Do you get this impression?

Yes, clearly, don't you? All of his work, basically, is a sort of introduction to music in literature.