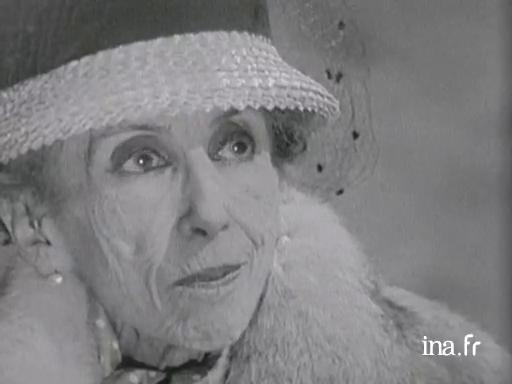 Now over 80 years old, Karen Blixen talks about her collection of short stories Babette's Feast, and discusses her life in Africa and her writing career.

Karen Blixen (1885-1962), a Danish writer that was born into a very rich family, started writing a series of tales at the age of 19, Seven Gothic Tales, which was written in a gothic style and published under the pseudonym Osceola. She keeps company with Denmark's high society and marries Bror Blixen, a rich epicurean who's an unaffected extrovert. Their common interest is their willingness to discover Africa, Kenya in particular, where the Blixens move to in order to run a coffee plantation in 1913.

Infected with syphilis, she returns to Denmark following her farm's bankruptcy. She then devotes herself completely to writing. Her novel, The African Farm (1937), in which she tells the story of her romanticised souvenirs of Africa, bring her worldwide glory. The book was then made into the film Out of Africa, by Sydney Pollack in 1985. In 1939, she received the Tagea Brandt Rejselegat prize (the Nordic Council's grand prize in literature). Of her other novels, Babette's Feast was also a great success and it was later on made into a film by Gabriel Axel in 1987.

"Babette's Feast", by Madam Karen Blixen, who is a great Danish author. This collection of short stories is named after one of those stories, Babette's Feast. I will not, Madam, ask you to tell me the story but simply to give me an idea, please.

Yes, I can do that. The idea of Babette's Feast, is the mentality and the destiny of the artist who finds himself different from those around him but who knows that if he [inaudible] his God, then he will serve God. Babette is a great cook from Paris who has to flee during the Commune times and ends up in Norway, in the home of two daughters of a priest who are very pious and very devout, but don't know anything about cooking. And Babette does her best for them for 15 years. But, towards the end, when she wins 10,000 francs in the French lottery, she asks them for forgiveness... permission to make, once again in her life, a truly grand dinner, a dinner like in the English café where she was formerly a cook. She does it naturally and no one understands, they eat, they don't know what they're eating but she's glad, she's happy. She feels like she has served God and that the angels are pleased of this dinner that she made, [inaudible] gains lots of sympathy from those around her. Another story, The Storm, it's the same idea. It's the desolation of an artist in an upper class environment. But here, though, it's more tragic. It's the isolation [inaudible] difficult by the heroine, a young actress that dies from her isolation from the world that's around her even towards her fiancé who loves her and that she also loves very much. She can't live with him, she can't live without him. She therefore dies from this conflict.

I would like for us to get back to Babette's Feast. Babette is therefore an excellent cook, a great chef and do you think that when she makes this dinner that will cost her the 10,000 francs that she won in the lottery, she does a work of art, doesn't she?

Yes. She feels it.

She feels it. Is it because it will make the people happy that she does a work of art?

No, we can't say that. Because they don't understand. They might have been just as happy with a Norwegian dinner that is completely...

Commonplace, yes. But she knows what she's doing, she has the satisfaction of doing something marvelous. She also gains great pleasure in doing this that she... that she had to do it, formerly, in Paris with people that understood very well and that appreciated.

Do you personally appreciate fine cuisine as much?

Not at that level, I don't think so, but I appreciate it enough. I think that it is an art. But everything, in life, is an art. It's that...

Everything that we do?

Everything that we do, is an art. And for the artist, it can be a very big satisfaction, even if the audience doesn't give her much "applause".

We could say... people have said, I think, about all of your stories, all of your tales, that they were fantastic, didn't they?

But you, do you think that life is much more fantastic?

You think, for example, that nothing can be more beautiful than a lion, correct?

And you don't think that you could invent something...

I wouldn't have been able to invent a lion. I killed lions, in Africa, when I lived there, and every time I saw a lion, it occured to me that it's something incredible, incredibly beautiful and strong and noble.

You haven't exactly led the life of a woman of letters or an author?

No. No, because I lived nearly 20 years in Africa like a farmer of a café farm.

You ran a farm.

And it was only once I came back from Africa that I began to write.

You wrote, at that time, The African Farm, which the French audience knows, which was published in France.

You have kept excellent memories from that time.

Yes, excellent memories. It was a world... first of all, it's a very very beautiful country with a very nice climate. What I liked most of all, was the natives. I found that by showing the relationship of the natives and [inaudible] of life, I'm very sad that it has changed so much.

You told me, earlier, that what characterises an artist, is to not experience fear.

You've never been afraid in you life?

Oh yes, naturally, I've been afraid, but maybe not as much as the people that I've known. I think that it's something very important to be scared.

To not be scared.

Yes, to not be scared. Nothing is as horrible as being afraid of something, fear ahead of time.

Did you during your entire lifetime, when you recall your first tales, you published three tales, I think, right, you were quite a young girl.

Yes, I wrote three tales when I was a young girl. I was only 19 and they were published in the Danish magazines. And people encouraged me to keep writing, but I didn't want to. That's not what I wanted, would like to do in life. I would answer: "No, I like travelling, seeing the world, go horseback riding, dancing, making music. I don't want to be a printed paper".

I think that it's great that today, however, this book of tales is released which is much more recent but that, at the same time, reminds us of those first three tales from your youth and which are all fantastic books. Thank you.