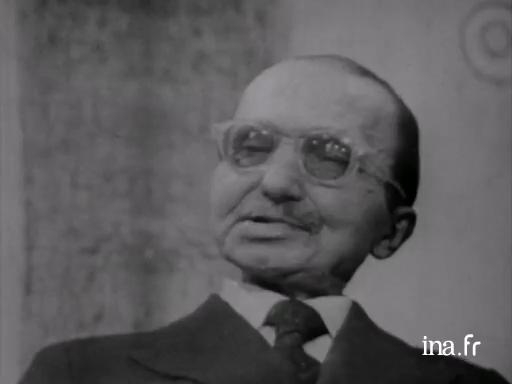 Interview with Nikos Kazantzakis regarding two of his books Zorba the Greek and St. Francis of Assisi.

Nikos Kazantzakis was born in Heraklion, in Crete, in 1883, and died in Freiburg im Breisgau (Germany) in 1957. His childhood and his youth were marked by a double experience, the matrix of his life and of his future works: the exile from Crete, plagued by insurrections in 1880 - which made him fiercely nationalist, and Nietzsche's nihilist philosophy, which became the subject of his doctorate thesis.

From 1910 on, he lived in Greece, where he started publishing and creating his personal pantheon: Homer, Nietzsche of course, Bergson, Georges Zorbas (whom he met in 1914), to which he later added Christ and Buddha, Lenin and Trotski. From the 1920s on, he traveled through all of Europe - he was in Spain during the civil war -, in the USSR and in Asia. Meanwhile, he pursued a political career, in his country and at UNESCO. Blessed with an amazing capacity to work, he wrote massive works: poetry, tragedies, stories about trips, philosophical essays, novels, and translations. His Odyssey (1938) is an epic that took 10 years to write, made up of 33 333 lines containing 17 syllables each.

In 1946, his seminal work, Zorba the Greek, was released. In 1951, The Last Temptation created a scandal: in this mystical work, he portrays the Christ as a man, who is subject to doubt. The work was blacklisted by the pope. A friend of Dr. Schweitzer, Nikos Kazantzakis received the Peace Prize in 1956. Buried in Heraklion, his epitaph reads "I hope for nothing. I fear nothing. I am free."

...now that Zorba has existed?

Absolutely. Me, I've never doubted that he existed and I have even less doubts, tonight, ever since I've known Mr. Kazantzakis because earlier, Mr. Kazantzakis was saying that he would have liked to be Zorba but he is Zorba. He is Zorba through what he writes, what he thinks, through his sensitivity, absolutely. Besides, I must say that the main character of what we refer to in cinema as "the one that has to die", right? (I give this title voluntarily so that listeners can relate to your book more easily), well, he's also someone who's very close to Zorba. Your shepherd who, at a certain time, chooses justice, chooses charity perhaps doesn't dance, but, you know, he could dance. And I always get the impression that your books are very close to the principles of Greek mythology because your Zorba is, after all, a sort of Antée, if you will. He makes contact with the earth and finds his force there and he finds his strength and his order in this very earth, since, we could easily say, he's an anarchist, he has an order that he respects and it's that which is the order of the earth which is the Plutonian order by excellence.

Now, I think we should ask a few questions about "St. Francis of Assisi" which is the novel that was just published. You told me that you wrote this book in gratitude, because Francis of Assisi saved your life twice.

Yes. I owed Francis of Assisi something, that's why I had... I had the great desire to explain my gratitude by writing a book about him. And the first time he saved my life, it was during the German Occupation. The Germans... I was on a small island near Athens, so the Germans... We had nothing to eat. And I was almost dying of hunger. And everyone around me was dying. So one day, I received a letter from a Franciscan friar who lives in Athens. He told me: "If you would translate Saint Francis of Assisi's biography, done by Jurgensen, then we will send you a case of provisions". So right away I'm... I received... it was a case that had marvelous things, almost unheard of, and I had forgotten them, meaning sugar, coffee, macaroni, rice, etc... And I wrote this book with a long prologue.

And the second time?