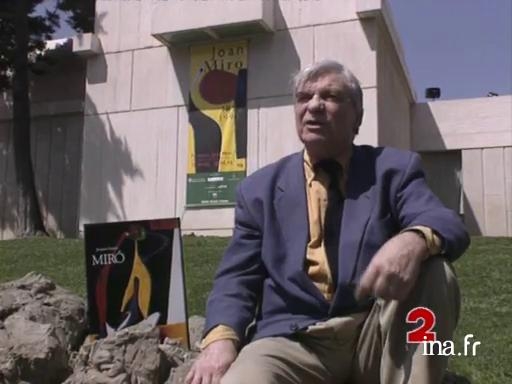 Retrospective of 180 paintings and 300 drawings by Joan Miro in Barcelona to celebrate the artist's hundred years. The exhibit is inaugurated by Spain's Queen Sophia. Presentation of Miro's main paintings and sculptures with commentary on the principle themes of his work, his admiration for Antoni Gaudi and the different artistic movements to which he belonged.

A student of modernist Barcelona, influenced by Dadaism, Joan Miro (1893, Barcelona - 1983, Palma de Mallorca) has a pictorial language so unique that he managed to disorientate the most hardened surrealists. Breton and Eluard, who came to visit his workshop in 1925 to see if the Catalan should join their ranks, left disorientated. Miro would say of these revolutionaries that they were "locked in a completely bland traditionalism". Pablo Picasso, Marx Ernst and Georges Bataille held a great admiration for him and one of his first buyers went by the name of Ernest Hemingway.

Even though the younger years of Miro in Paris, where he came to make a living from his art, were marked by misery, recognition came at the end of the 1920s. He shared his time between Paris and the family farm in Montroig, near Tarragona. Catalonia held an esteemed position in his work. He was much affected by the Spanish war, fleeing France during the Second World War, he moved to Palma de Mallorca in 1941 with his wife, Pilar Juncosa, and their only daughter.

Painter, sculptor, ceramicist, Miro showed that his palette was a lot more complex than the childish traits that Breton attributed to him when starting out. Over the years, weightless poetic forms have made way for sexual allusions that are often very crude and a cosmic universe populated by strange characters.

There. Painting before we end and a fantastic retrospective of Miro. It takes place in Barcelona. The great Catalonian painter would have turned 100 this year. In Barcelona, then, 180 paintings and 300 drawings are on display. Inauguration this week in the presence of the Queen of Spain, Georges Begou and André Sora.

A guardian of modern and contemporary art, Queen Sophia happily honoured the Miro centenary retrospective. For her and for all of those who will visit the Barcelona Foundation, it's a pure poetry bath with the colours of Catalonia that burst all over white walls. Yellow, red and black get the lion's share. Although he was influenced by the different movements of the century he's lived through, (he lived 90 years), Miro has always preserved an authentic personality. He cannot be labeled. He's a free genious.
(Music)

Just like the Catalonian architect Gaudi whose most original monuments he saw erected in his youth, Miro is very passionate about curves, arabesque designs and colour mosaics that make garden paths, and home facades and roofs sing.

Aside from his admiration for Gaudi, there were nevertheless deep similarities. They are both from the same Catalonian stock and they have, both of them, proceeded with nature to evade it and with a visionary imagination that is as present in Gaudi's architecture as it is in Miro's paintings.
(Music)

In the end, the foot has always been the organ that connects you to the earth. He said that a Catalonian can always... should always have his feet on the ground so as to bounce higher up afterwards. There is always this coming and going between the ground and the sky, the night, music.
(Music)

As a youngster, Miro saw himself as a Fauvist after having been a Cézannian and later on a Cubist. But these were short flings with no tomorrow. His inimitable style soon imposed itself, firmly grounded between the earth and sky.