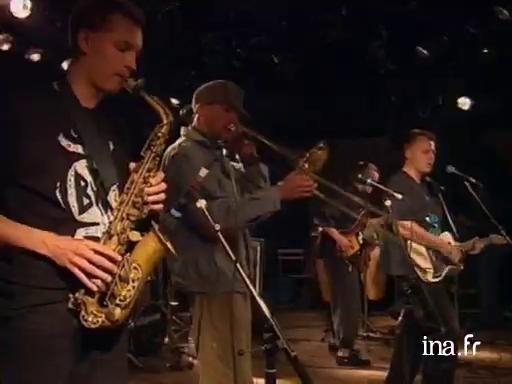 The Lithuanian rock group Bix perform one of their songs.

Founded in 1987 during the last hours of the country's submission to Soviet domination, Bix is probably the most famous band in the history of Lithuanian rock music.

Led by charismatic singer and guitarist Saulius "Samas" Urbonavicius, Bix, an energetic band without an overpolished sound, has very quickly imposed itself through the vicious lyrics of its songs, which are truly committed to an anti-communist rebellion, and also through the lyrical power of its hybrid music, which mixes grimy blues, sophisticated new wave and Baltic folk music. Albums such as 1991's Akli Kariai, 1992's La Bomba and 1993's Doozgle have become legendary in Lithuanian pop music. However, Tikras Garsas, a live album recorded during an acoustic tour where they were accompanied by a gleaming string orchestra and brass band, is probably the best proof of Bix's quality commitment.

After the release of 1995's 7, Bix's music suffered a steady decline, always trying to reach greater mass appeal. Their last album, Wor's, was released in 1997.