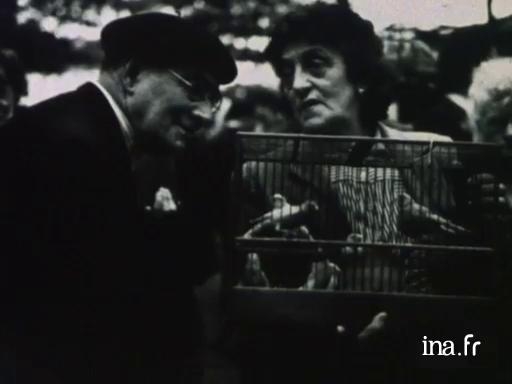 The photographer Izis talks about his conception of photography and his dreaming character. He also mentions his childhood in Lithuania and his arrival in Paris. This interview is illustrated by several photographs.

As an adolescent, he was an apprentice to a photographer in his town and was passionate about painting. In 1930, he took refuge in Paris where he worked in different traditional studios. During the Second World War, his family was decimated. A refugee in Limousin, he worked there touching up photos under the name of Izis. In 1944 he was arrested by the Nazis. Once free, he joined the Resistance. He took several portraits of resistance fighters in a more lively and realistic style than he usually did. These photos would be his success at the end of the conflict.

Back in Paris, he met Brassaï, Laure Albin Guillot and E. Sougez. His traditional style from before the war evolved towards a poetic vision. He soon opened a studio and began to exhibit. In 1949, he was part of the launch of Paris Match, a title with which he would work for 20 years. During that time, he became friends with Chagall and Prévert and met several artists of the era that he would photograph. In 1950 he released his first book Paris des rêves. It was to be followed by several others, made alone or in collaboration with other artists. Paris des poètes published in 1977 would be his last book.

In 1951, he presented at the MOMA in New York at the exhibition Five French Photographers in the company of Cartier-Bresson, Ronis, Doisneau and Brassaï. In 1978, he was the guest of honour at the Arles Rencontres. He died in Paris in 1980.

The idea of photography is that you must be very modest, and pose as little as possible. You must, at the first glance, even not recognise who the photographer is? And naturally, this photo is good, and taken by a good photographer, you still recognise who took it, but you have to blot it out, absolutely blot it out. Photography is above all a document, a good photograph, naturally, transforms the document since it gives something, such as a photo by Atget which gives us a picture of how Paris was in 1900. There is something more than a document, something more than Paris in 1900, and that comes from Atget. And I would like to achieve the same goal. I also do reports, reports on current day Paris, which I believe can remain as an account for years to come, I only talk about reality but without any help from the laboratory. But I am not a journalist. I am more of a flaneur than a journalist.
Music

I am attracted by nostalgia, I expect that the others say that there's nostalgia in photos, I don't know. I am starting to believe it since I'm told by everyone. My characters, I am told, are somewhere between reality and dream.
Music

I have always been a dreamer, at school my nickname was: the dreamer.
Music

I believe that my dream has haunted me since childhood, and now I accept it, entirely.
Music

I believe that my childhood plays a big part in my life, in my work. It was a very poor childhood, as for most Lithuanians. We didn't have enough to eat every day, we ate meat once a week, and it made it all the more marvellous when we could have it, it was a very hard life. And when I arrived in Paris, I had the impression that I'd changed continent such a distance, such a difference in life, in the standard of living, and also in the freedom to breathe in Paris. And I chose to live in Paris.
Music

I didn't choose Limoges or Marseille, I truly chose Paris. The war was on, the occupation, persecution, for those from Limousin, during the war, but I will always live my life in Paris if I can.