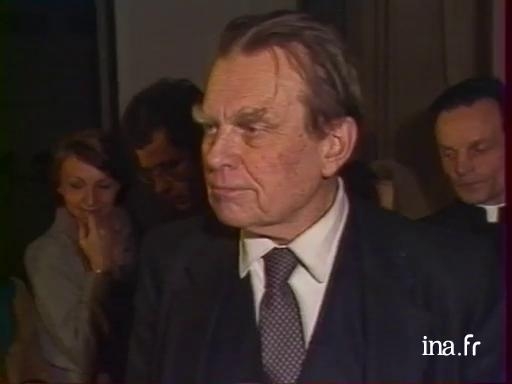 Czeslaw Milosz, who just received the Nobel Prize for literature, discusses his award, the role of poets, the importance of love, the spiritual transformation of the world, and Poland.

Czeslaw Milosz was born in Seteniai (Lithuania) in 1911, and died in Krakow in 2004. Born into a family of the old Polish nobility, he started studying law at a Vilnius university. From 1933 on, he started publishing poetry collections and receiving literary prizes.

A member of the avant-garde movement, he founded the Zagary literary circle, a leftist group with apocalyptic tendencies. In 1940, after the Red Army's invasion of Lithuania, he found refuge in Warsaw, where he helped Jews escape from the Nazis, which earned him the "Righteous amongst the Nations" title after the war. A diplomat in post-war Poland, he continued publishing poems, novels and essays. He stood out from the commemoration ideology, which was dominant in Poland at the time, and pleaded for writers' absolute freedom. Similarly, he refused the socialist realism imposed by Stalin on countries under Soviet domination and exiled himself in France in 1951, where he obtained political asylum.

In 1953, he published La Pensée Captive and Essai sur les Logocraties Populaires, which were analyses on the place and role of intellectuals in a dictatorship. In 1961, he went to the United States and taught Slavic literature at a Berkeley university. Having obtained American citizenship in 1970, he returned to Poland after the fall of communism and spent the remainder of his life in Krakow. In 1953, Czeslaw Milosz was awarded the Prix Littéraire Européen, and in 1980 he won the Nobel Prize in Literature.

Polish author Czeslaw Milosz, Nobel prize for literature was, last night, passing through Paris. Our reporter, Jean Offredo, met with him, then, in Paris.
(Silence)

Czeslaw Milosz is 69 years old. A Pole born in Lithuania, it was in Warsaw and then abroad where he broke away from communist power, and in France and in the United States where he became one of the greatest contemporary authors. Poetry of exile, for which his attachment to native soil, his Christian faith, and his sense of manhood have added a literary dimension which has finally gained recognition thanks to this Nobel prize. "The Captive Mind" and "The Issa Valley" are works that are now part of the world's literary patrimony. Czeslaw Milosz, as a poet, does receiving a distinction such as the Nobel prize change your life?

I hope not. Up until now, yes, it changed my life, but I'd like to return to my usual preoccupations.

Throughout all of your poetry, we feel a very large vision of the poet's role in society, in the world, a bit as if poets are the prophets in modern times.

There's nothing special in me. It's the tradition of Polish literature and Polish poetry.

You also mention somewhere that the world will be saved thanks to love. This word comes up often.

Yes, but I don't use that word very often. I don't use it... very rarely, rather, because, you know, talking about that, it's a bit shameful.

There are words that shouldn't be used too often.

How much of your faith is found in your poetry? Is there a lot of it? And in today's world, we tend to think that maybe, this world should become more spiritual.

How does Czeslaw Milosz see Poland in 1980?

Well, you know, it would be a bit presumptuous to discuss this here because there's so many trends that we, the Polish, don't really understand what's going on. These are very contradictory trends so we'll see.

But do you also think that it's an important movement that's occurring and that is within Polish tradition?

Yes, something very important has happened. I don't know up to what point it's within Polish tradition. It's also something new on a global scale.