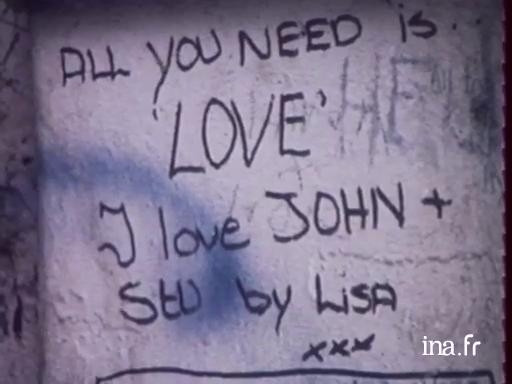 Report in Liverpool, on the trail of the Beatles. The club where the Fab Four launched themselves has become a parking lot, but their spirit lives on in the streets and through their music.

Formed in Liverpool, at the beginning of the 1960s, by John Lennon, Paul McCartney, George Harrison and Ringo Starr, the Beatles were simply the most famous and influential rock group in the history of 20th century popular music.

From their first records released in 1963 (Please Pease Me and With the Beatles), the Beatles were swept by a truly crazy infatuation that thrust them to the top of the British, and soon American, hit parades. The Lennon-McCartney duo accumulated pop hits, which were both light and melancholic and featured extremely catchy melodies (A Hard Day's Night, Help, Yesterday), and in 1964, "Beatlemania" reached its summit. With 1965's Rubber Soul and the following year's Revolver, the Beatles started a genuine aesthetic revolution that changed the face of rock music: the songs were increasingly sophisticated; the lyrics were deeper and more personal; the arrangements were more elaborate and mixed, even back then, all genres (folk, pop, rock, classical...) and all sorts of instruments (sitar, harpsichord, other string instruments).

Having decided to no longer dedicate themselves entirely to studio work, the Beatles then recorded their biggest masterpieces: 1967's Sgt. Pepper's Lonely Hearts Club Band and 1968's legendary white album - seminal works that were the seeds of the forthcoming history of rock music. However, inner tensions in the band started to rise. The Beatles released their final album, Abbey Road, in 1970, and split up soon after.

Rock'n'roll was his thing, so it therefore started in Liverpool, where Bernard Rapp, our special envoy in Britain, once again left for Liverpool, in the very town whose tavern featured the debut performance by the Beatles, but he found nothing there, today, nothing other than a parking lot.
(Silence)

[English] It's here, there. I'm in the exact spot. The tavern's door was there. And there were stairs that went all the way down to the hall. But all of this was buried under this parking lot in 1973.

How many people came to the tavern?

Did people queue to get in?

Damn right. The queue went all the way to the street, sometimes it even went around the block.
(Music)

What's left of the Beatles today, in Liverpool? Very little, to be honest, except maybe the walls, which remember. It must be said that fans have come here from all over the world to refresh their memory. Talkative walls, photo souvenirs, and even local artists who sacrifice themselves, in their own way, to the worship of John Lennon.
(Music)

With the lack of an official monument consecrated by the city, fans of the four Liverpool boys have opened up a museum, no doubt a small museum, but the heart is there. Here, everything comes from personal gifts sent by fans from all over the world. They are more than 2000 fans, residing in 30 countries. Thanks to them, friends of the Beatles now have a pilgrimage location, and it's here that, each year, thousands of men and women come to search for their memories.

[English] Here is the tavern, or, rather, its reproduction since the real one no longer exists. We built this one in the Beatles museum, and this is where Liverpool visitors come to gather. Here, it's exactly like the original tavern. Even the stage was exactly like that. Here, I feel a bit like I'm at home.
(Music)

The Beatles will remain the forerunners of a style of music. The "Beatles sound", as we say in Liverpool, where many groups, today, are ready to take their place like right here. How old are you?

What exactly do the Beatles represent, for you?

They represent everything to me. For everyone else in Liverpool, for that matter. Here, you have to have a guitar, because the Beatles showed us that their dream could come true.

Even today, why do you choose the Beatles style?

Well, I have brothers and sisters that are older than me. They all would go to the Cavern, of course, and since I was 2 years old, I've only heard this music at home.
(Music)

Interview with Ivan Klima regarding Love and Garbage