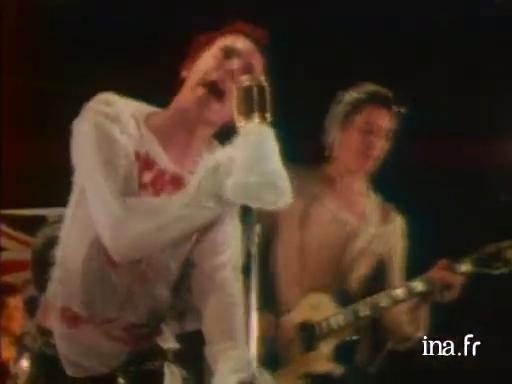 In 1977, the punk group the Sex Pistols, led by their singer Johnny Rotten, perform God save the Queen live.

An English band that spearheaded the punk movement that invaded Europe in the 1970s, the Sex Pistols are one of the great revolutionaries of the history of 20th century popular music. Discovered in 1975 by Malcolm McLaren, the dandy post-situationist former manager of the New York Dolls, the Sex Pistols, a basic rock quartet fronted by singer John Lydon (known as Johnny Rotten - one of the great myths in rock'n'roll history), are an immediate sensation with their adolescent, brutal and minimalist music, which is intentionally provocative and advocates a return to values of revolt and the original rock excesses.

Influenced by American "garage" rock (the Ramones, the Stooges), they invented, at that time, the punk movement, which, with its nihilist words of order (the famous "No Future") and its ostentatious aggressivity in both behaviour and music, revealed itself to be a violent indictment against the upper class values of British society. Their only album, Never Mind the Bollocks, released in October 1977, with its violent parody of the English hymn God Save The Queen, was definitely one of the biggest records in the history of rock.

The Sex Pistols abruptly came to an end in 1978 but the repercussions of their quick passage are considerable. Their influence can be found in the most radical and politicised movement of 1980s new wave (Clash) all the way through the emergence of bands such as Nirvana in the beginning of the 1990s.