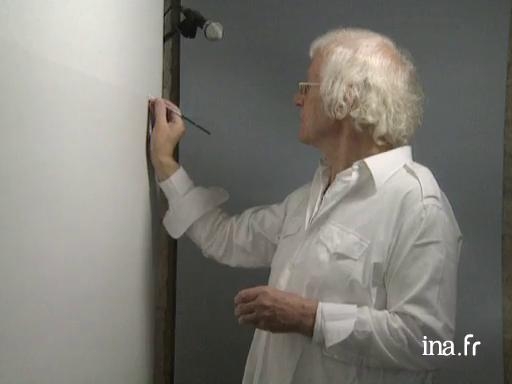 Report from painter Roman Opalka's home, where he is painting his Details series: portrait and interview with the artist on his work.

Roman Opalka doesn't paint time, he has created it since 1965 by a monomaniacal piece, The Details, which is based on three elements: canvasses completely covered in arithmetic sequences that he enumerates in Polish and accompanies with his self-portrait photographed day after day, with the same frame, the same white shirt and the same expression. The numbers go all the way up on his ever-whiter paintings, while time does its work on his voice that became rougher and his face crisscrossed with wrinkles under thinning hair. An implacable composition for a philosophical piece which reminds man of his mortal condition, against all vanities. This use of his own body is close to body art, but his work doesn't have the violence of Orlan performances, the French Plasticien who denounces the diktats of beauty by transforming her body and her face by multiple operations.

Born in France in 1931 to Polish parents, Opalka and his family were exiled from their native country in 1940. Although not directly a victim of the Holocaust, the painter was strongly influenced by these events. At the end of the war, he returned to France, before being repatriated once more in Poland the following year. He definitively left the country in 1977 to live and work in France.

Everything began in 1965, in Warsaw, when Roman Opalka painted in the upper left-hand corner of his canvas the number "1". And then "2" and "3", until he had covered it completely. Today, 180 canvasses later, he has exceeded 5,959,000 and continues to devote his life as an artist exclusively to numbering his time.

I took my body, my length, my existence as I have often said, as a sort of pictorial sacrifice and the essence, the embodiment of this procedure, creates a work much the same as we all create works with our lives. Every time that I add a number, everything changes. It is a sort of journey, if you will, where the steps are conscious each and every time, each step adds to the others, the weight of the duration of all these steps that you have lived. I even use death as a tool for a work. To finish, in order to complete a work, I use death as a tool.

In 1972, Roman Opalka decided to add to the grey background of every canvas 1% of white in addition, in order to progressively lighten it.

If all is going to go well for me, I will be after ten or so years working with absolute white. That is, there is an exultation during the existence of a painter that goes, every day, towards the white. In order to have transformed pictorial whites into moral whites.

The work of Roma Opalka has only one title: Opalka 1965, from 1 to infinity. Each canvas is called a detail, each photo that he takes of himself every day an extreme detail.

There is naturally a performance, there is a sacrifice in this procedure, but it is also true that there is happiness; this procedure has nothing to do with a sort of pessimism: everything is bad. On the contrary, it is an emotion of an existence that manifests itself, it is now sadness.