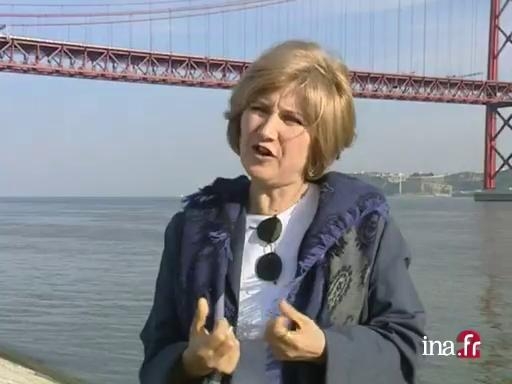 Conversation in Lisbon with the author of La Couverture du Soldat, Lidia Jorge, who looks back on the history of her country.

Since The Day of the Prodigies (1980), a first novel as an allegory of Portugal under the Salazarist regime, Lidia Jorge (1946) is regarded as one of the most original and disturbing voices of new Portuguese literature.

Originally from Algarve, with a degree in Romanic Philology from the University of Lisbon and a high school teacher, she married her first husband in 1970, an officer in Mozambique and in Angola, where she witnessed a colonial conflict that she recounted in The Murmuring Coast (1988). Back in Lisbon in 1974, after the Carnation Revolution, she remarried a political journalist of the Diario de Noticias, she taught in an Arts Department before joining the Higher Authority for Social Communication.

From narrative experimentation and polyphony from the often allegorical first novels, like The Wild Town Remembering (1984) to the realism of O Jardim Sem Limites (1995), her work analyses the evolution of democratic Portuguese society. The Murmuring Coast was adapted for the cinema in 2004 by Margarida Cardoso.

Lidia Jorge, ambassador, then, of Portugal. The author of The Soldier's Blanket is a witness of her country's history. Geneviève Moll and Philippe Jasselin met with her in Lisbon.

Lisbon has been running along the Tage for 2500 years. The Lusitanians, the original civilisation, witnessed the arrival of the Venetians, the Greeks, the Romans and the Arabs. But this route of water has allowed the Portuguese to go to discover the world, and to give this little country unlimited glory.
(Music)

And even after the 1755 earthquake, which destroyed three fourths of the city, thanks to a sumptuous reconstruction, it has remained one of the world's main attractions. Writer Lidia Jorge, who comes from one of the poorest provinces of the country, Algarve, sees this city as the summary of a history that is both grandiose and tragic at the same time.

I think that Lisbon is a secret city, a labyrinthine city. And I wasn't born in Lisbon, I came here when I was young, and Lisbon totally grabbed my heart.

Each step she takes in this city reminds her of the flourishing past that she, like all Portuguese people, has in her heart.

During the XVIth century, it's true that here, it was a meeting point for cultures and civilisations. Here, a true intersection for Europe.

But the beauty fell asleep, especially during the XXth century. And even the shadow of Fernando Pessoa, the great poet, hasn't changed Portugal's drama. In the middle of the century, the Portuguese migrated towards America or Africa. And starting in 1961, the Tage became the route for colonial war in Angola and in Mozambique, a war that bled and bruised the country.

We were the first ones to discover, to circumnavigate Europe. And, from a colonial standpoint, we were the last ones to leave Africa. And we truly felt that we were going against the tides of history.

Lidia Jorge's books talk about this drama because she, like all others of her generation, had seen death. Today, the docks that received those condemned to go to war have been turned into nightclubs and places of relaxation. The youths have forgotten the past. Once again, the city is open to the world.