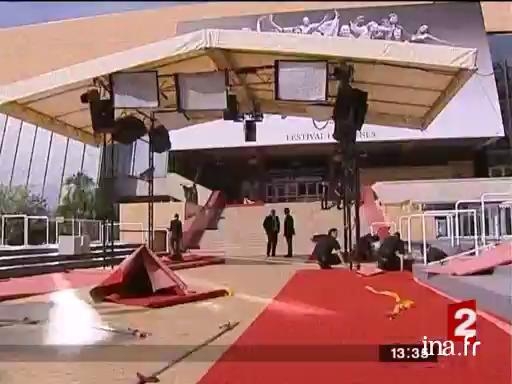 Report in Cannes right before the launch of the 60th Festival: onlookers at the bottom of the stairs, installation of the red carpet, constant phone calles in the palaces' halls, and arrival of Diane Kruger, the master of ceremonies.

Since its creation in 1946, the Cannes Festival has been one of the main international cinema festivals, aiming to offer a programme that is both popular and specialised, open to productions from all over the world (Asia, Middle-East?).

Originally scheduled during the autumn season, it changed to the springtime from 1951 which reinforced its touristic dimension. During every two weeks, the public and journalists gather on La Croisette, motivated by the desire to approach the "stars" of the moment or for professional reasons to find out which films have been selected from the official competition or in a different parallel selections (Directors' Fortnight, Un certain regard...). In 2007, on its sixtieth birthday, the festival continued to uphold its rituals and codes: going up the stairs and the red carpet, the awards ceremony, the "Palme d'Or", started in 1955... To mark the event, the festival president Gilles Jacob invited 33 grand directors to the occasion (Cronenberg, Kitano, Loach, Polanski...) to participate in the film homage Chacun son cinéma, by each of them offering a short film of three minutes on the theme of the movie theatre, in essence the place where emotions are shared that's accessible to everyone.

Beyond the glitz and glamour and commercial negotiations organised around the festival, Cannes is also the assertion of an attachment to democratic values that the seventh art holds. Every year, the prizewinners are proof of these political and aesthetic engagements.

From the Elysée's red carpet to the one at Cannes. The 60th festival opens tonight. One of Wong Kar-Waï's films will be opening the competition. Cannes is 15 days of films from all over the world, stars and glamour, and on the site, it's time for the final preparations. François-Julien Piednoir, Vincent Bouffartigue.

Ok, we mustn't lag, the screening is about to begin. The decor is already set, like palm trees. The sea, the sun and the gulls are dolling themselves up. The yachts have left Malta to bask in the bay of Cannes and large saloons are cruising up and down the Croisette. At the base of the stairs, Mauricette and Danièle have been virtually chained to the festival for 20 years. They even arrived before the paparazzis.

Since noon yesterday until 1 in the morning, and since 6.45 until tonight.

And him, on the right, he hasn't even had time to take a shower.

In the palaces, no more room.

Hold on, I'll get him on the line.

The concierge sleeps with one eye open, because with rooms going for 7,000 euros each, service must be perfect. Do you once again have prestigious customers this year?

There are always prestigious customers, because all of the clients are prestigious.

Well, here's one prestigious customer. Diane Kruger, the master of ceremonies. She only has a few hours to prepare herself. Let's let her get ready. And now, on to the saint of all saints, the festival's palace. 4,000 journalists are chasing after their press badges. Blue, yellow, red, green, the best one is the white one. Yellow?

You've lost, miss. And unfortunately, a young France2 journalist, I only have a pink one, so I don't have the right to show the 24 sexiest stairs in the world nor step on the famous red carpet that's trampled on like a doormat.

Because when 2,700 people walk across it, the bright red... It gets changed before each official screening.

And to christen the carpet, some big names are already circulating.

Ah, here's Diane again. She just left her bedroom. That's a very good sign. It means that the 60th festival is about to begin.