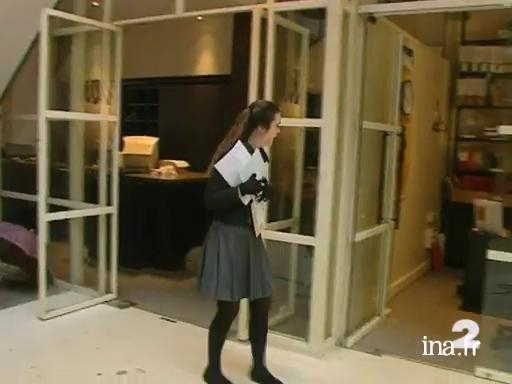 Conversation with prolific Belgian author Amélie Nothomb at her home, in Brussels.

Amelie Nothomb was born in Japan in 1967. Daughter of the Belgian ambassador, she then lived in China, southeast Asia and the United States before moving to Belgium at 17 years old. At 25 years old she published her first novel, Hygiène de l'assassin, which immediately met with success. Since then she has published no less than 16 novels, one a year.

Her writing, largely autobiographical (Le Sabotage Amoureux in 1993,Stupeurs et tremblements in 2004, Ni d'Eve ni d'Adam in 2007), often talks of her experience in Japan that she considers as the foundation of her personality, from her visceral attachment to the country. Others were, on the contrary, purely fictional and rather fantastic: Les Catilinaires in 1995, Peplum in 1996, Journal d'Hirondelle in 2006.

The author was also appreciated for her eccentricity, not hesitating to appear on TV wearing extravagant hats or outrageous makeup. Two of her novels were adapted for the cinema, Hygiène de l'assassin in 1999 and Stupeurs et tremblements in 2003 (a role for which Sylvie Testud received a César for Best Actress).

We're now going to talk about literature, with one of this autumn's confirmed talents, the very wordy Amélie Nothomb, who's "Cosmétique de l'Ennemi" is published by Albin Michel. Already a huge success. Amélie Nothomb intrigues us, but not just because of her penchant for dark environments and for meanness. Geneviève Moll and Claude Barnier met with her.
(Music)

She says that she can write anywhere, that nothing disturbs her when her pen is in motion and she's in her interior submarine. She also says that she loves music, above all. Purcell, Schubert and Björk. She says that she was Japanese until the age of five, and that afterwards she thinks she broke through her solitude when she arrived in Europe.

When I arrived in Belgium, I discovered an even greater solitude than I had ever known before. And it was at that time that I started to write. So it's still the discovery of the Belgian land that turned me into a writer.

She says that she became Belgian and that she also likes the North Sea, its grey waters and the rain. But she loves Brussels when, before the daytime, she starts her work of writing.

I live near a tramway stop, and in the morning at five thirty-five, I hear the first tramways, whose noise is like singing which I find quite charming. This "singing" of the tramway is enough to make me feel Belgian.

But she's also a French writer, one of the few to earn a living from her pen. Her latest novel describes, with violence and sometimes cruelty, the struggle we all have with ourselves. Wordy, she always surprises us.

I spend my life being pregnant with books. My life is a long pregnancy of books, since I'm now thirty-four and I'm pregnant with the forty-first one.

Amélie Nothomb's latest, published ten days ago, has already been picked up by one hundred fifty thousand readers.