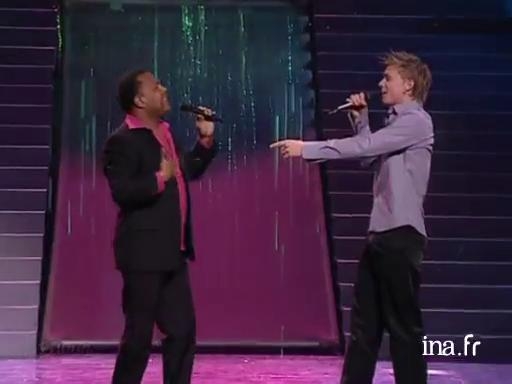 Representing Estonia at the 46th Eurovision contest in Copenhagen, Tanel Padar, Dave Benton and 2XL sing in English Everybody which wins the grand prize.

Estonian rock singer, born the 27th of October 1980, Tanel Padar made his name in 1999 by winning the Kaks takti ette, a televised competition for young singing talent organised every two years and very popular in Estonia.

A singer in the group accompanying the Estonian representative in the Eurovision Song contest in 2000, he won the 2001 edition of this contest with the title Everybody performed in the company of the boy-band 2XL and the singer of Caribbean descent, Dave Benton.

A singer with a warm and sensual timbre he now performs in the company of the group The Sun in a traditional rock style, robust and lyrical, and indisputably stands out as one of the most popular artists in his country.

So it's Tanel and Dave, Tanel was here last year, he was in the choir for the song that represented Estonia. And now, he's the one who's come to do a duo with Dave. Everybody is in high spirits!
(Music)

Yeah, the atmosphere, the Parken stadium here in Copenhagen is active, thirty-seven thousand or thirty-eight thousand people who are in high spirits.