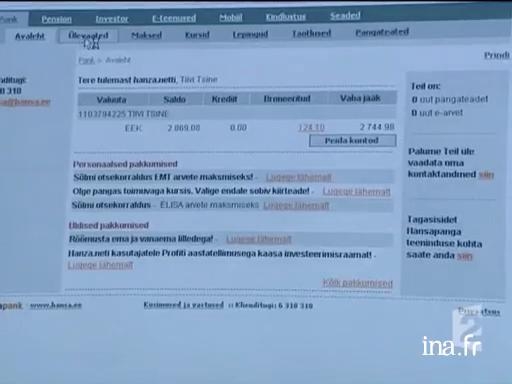 Amongst Europe's countries, Estonia is one of the most advanced as far as high technology goes. Report iin Tallinn, where many Estonians pay their taxes online or pay for parking metres with their cellphones.

In the context of the society's modernisation since the country's independence in 1991, and with the goal of matching the criteria for European Union integration, the successive Estonian Governments have preferred a rigorous policy of budgetary controls on public spending for many years.

The emergence of new technologies in the 1990s has directly contributed to the achievement of this objective and more widely, has helped to transform daily life for the Estonian people. From schoolchildren to elderly people, the Internet and mobile phones have imposed themselves on all levels of society, revolutionising usage and behaviour for everyone (online purchases, meetings...).

Estonia, re-baptised "e-stonia" is today the European champion of new technologies. To it we owe the creation of the software Skype and Kazaa. Since 2005, the study of citizens can also vote online for elections thanks to their electronic identity cards, or pay their taxes by a simple phone call. With its high rate of growth, the country represents a particularly attractive market for businesses in the telecommunications sector.

...a country that, as you know, is one of the 10 new countries that joined the Union, 2 years ago. It fully benefitted from the economic effect, to the extent that Estonians are now amongst the most advanced in the area of high technology. Report: Anne Ponsinet and Xavier Luisette.

In her very own way, from her home in the woods, Tiivi is participating in Estonia's technological revolution. Once a month, she rides her bike 5 kilometres to get to the computer section of the municipal library, which is for those who have neither computer nor internet at home. She's come to verify that her retirement benefits have been paid.

What I can do here, is pay my homeowner's taxes, my cellphone bill and my other bills, everything that I can do online.

In the city, one of the most common applications of these daily e-technologies is paying for parking with a cellphone. A call to say: "I parked my car" and the payment is made. At school number 21, the math class of the first form is over. The teacher enters the course's content and the homework to be completed into the school's website.

Almost every day, my parents look at what I've done at school and the grades I've received.

This isn't the computer room of the secondary school, but of the Cabinet. Today, the head of the government was our guide, during the European celebration, an occasion to discuss Estonia's objectives: doing everything by computers to reduce paperwork and be more efficient. In the streets, agents also use cellphones to verify parking payments. Agents that work for a private company contracted by the city. No city employees work in this Tallinn department. 15 years after leaving the USSR, Estonia cultivates a modern image, with, as expected for this year, the smallest public debt in the entire European Union and the highest rate of growth.