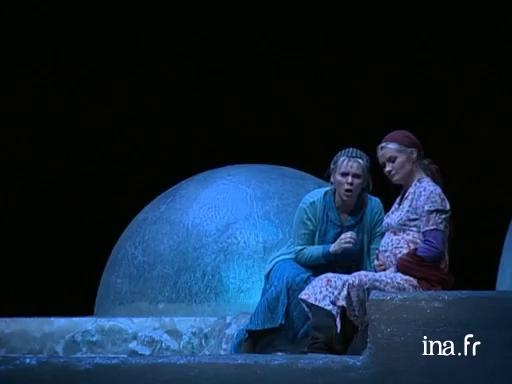 An extract from the opera Adriana Mater by Kaija Saariaho at the Bastille Opera, directed by Peter Sellars and performed by Patricia Bardon, Stephen Milling and Solveig Kringelborn.

Born in Helsinki in 1952, Kaija Saariaho studied music in this town, then in Germany under Brian Ferneyhough and also in Paris with Pierre Boulez. Very attracted by spectral music, by the sound in itself and the ensemble of its acoustic properties, she refused the constraints of post-serialism and demanded her freedom. She composed numerous works in which she often mixed electronic and traditional instruments, with a preference for the violin cello, but it was her operaL'amour de loinwhich gave her celebrity status and earned her the Grawemeyer prize in 2003. Kaija Saariaho is now a known, prize-winning musician, who receives commissions that she sells the recordings of.

For a few years, she has written more for the traditional orchestra like in herCastle of the Soul. But in any case, what interests her is not work on abstract data, but expression and communication of images and emotions. This human aspects of her work can be seen in her preference to collaborate with musicians that she knows well, and to write for them.