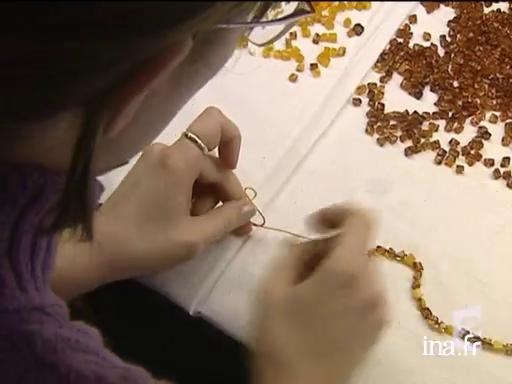 Report in Lithuania on amber, from ancient pagan legends that deified it up until its current transformation into jewelry.

Amber comes from the fossilised remains of resin from pine and spruce forests that covered northern Europe 40 million years ago. Drenched in water, in these forests were subjected to their resinous components - and to the insects attracted by the odour that it released and thus trapped in the long process of fossilisation. This transformation led to the creation of a more or less translucent stone, with honey-like colours, particularly present on the coasts of Estonia, Latvia and Lithuania: and though. From the Stone Age, Baltic and, used decoratively or for medicinal purposes and always given magical powers, has been much bought and sold which shows it's great trade value. The amber routes were taken by merchants from northern Europe to the Mediterranean Sea, to India, to Kashmir, to Russia and even to China.

The discovery of DNA at the end of the twentieth century raised the hopes of scientists wishing to deepen their knowledge of prehistoric worlds by analysing the organisms trapped in these rocks. David Penney has thus been able to demonstrate in 2005 for the first time the presence of hemolymph, an equivalent to blood, in insects dating from 20 million years ago.

Since we're talking about trips, beginning of summer, it's in the beginning of summer that a certain number of pagan rituals, afterwards picked up by the Catholic church, take place in the Baltic countries. That's what's happening right now in Lithuania. Gilles Rabine, Yann Moine.
(Music)

For a long time, a very Catholic Lithuania was a pagan land that celebrated Perkunas, the god of thunder and fire.

At the edge of the Baltic sea, Perkunas had built an amber palace for Yurate, who lived there without incident until the day she fell in love with a young and handsome fisherman.

Jealous, Perkunas destroyed the amber palace where Yurate, the goddess of the sea, lived. The amber palace exploded into millions of small pieces, all over the Baltic sea.

Since then, we find amber on the beaches. In the Middle Ages, a kilo of amber was worth a kilo of gold, today its price depends on its colour, white, yellow, cognac, blue or green.

Fashion and creators are rediscovering amber, which is a fossilised resin, fragile but easy to shape. In this studio in the suburbs of Vilnius, one gross ton of amber is processed each month.

At the end, only twenty to thirty percent of the rough amber is left.

Today, amber is becoming rare, as rare as the craftsmen who, before the polishing, can guess the transparence and the colour of a future rough piece. The amber museum possesses a few genuine treasures such as these inclusions of insects that are forty million years old.

Prehistoric men did not know how to polish amber.

The first men only wore these amulets for important celebrations, and only the chiefs wore them.

Our very earliest prehistoric ancestors thought that the pieces of amber that they picked up on the beaches were the sun's tears.