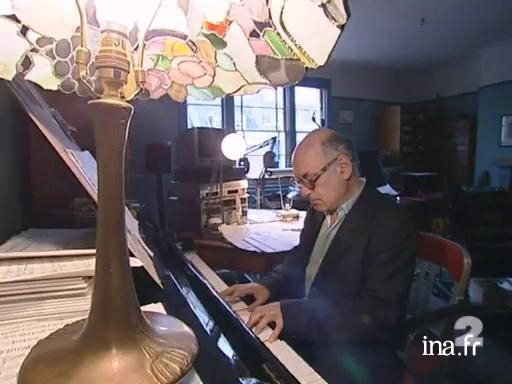 Portrait of Michael Nyman, contemporary music composer, who scored the soundtrack for The Piano and also The Draughtsman's Contract... Nicknamed the "dandy conformist", he mixes classical and baroque music with more contemporary sounds.

Born in London on the 23rd of March 1944, the composer and pianist Michael Nyman, a graduate from the Royal Academy of Music and King's College London, began his career as musicologist publishing a work of reference in 1974 on new music: Experimental Music: Cage & Beyond. At the same time as this theoretical activity, Nyman, from the end of the 1960s, collaborated with unusual contemporary music groups such as the Scratch Orchestra and the Portsmouth Sinfonia beside musicians like Brian Eno and Gavin Bryars.

In 1976 he founded his own orchestra and resolutely joined the neoclassical tendency of the minimalist movement (a return to tonality, usage of fragments of traditional work skilfully remixed, with a pulsating beat). In 1982 Nyman wrote the sound track for the Peter Greenaway film, The Draughtsman's Contract. This collaboration will continue until the 90s giving birth to a number of masterpieces (Drowning by Numbers (1988), Prospero's Books (1991)).

Ever more in demand for cinema, Nyman would compose some 75 film scores amongst which the score for The Piano by Jane Campion, Palme d'Or at the Cannes Festival 1993. Working voluntarily for dance and fashion, Nyman is also the author of several operas, a series of concertos (of which one for violin made by Gidon Kremer in 2003), and piano works, one of which he has recently given a reference version of:The Piano Sings (2005).

The release of a compilation album by one of the most appreciated soundtrack composers, Michael Nyman, who wrote the soundtrack for "The Piano" and "The Draughtsman's Contract". He mixes classical and baroque music with more contemporary sounds. In London, Olivier Lenuzza.
(Music)

"The Piano" a film by Jane Campion. A film and soundtrack that have sold two million copies worldwide. The piano lesson orchestrated by a certain professor Tournesol who lives in the middle of his scores. Michael Nyman was born in London during World War II, and it was in London that he wrote music for the seventh art.
(Music)

What noise it can make in this very quiet environment, because, you know, that's the way that I work. I write here, I watch the film, I look at my notes, and if something precise happens, then...
(Music)

"The Draughtsman's Contract", a theme by Purcell revisited by the musical craftsman.

If you're not a traditional composer, you do everything by computer, you write then you print, me, I can't deal with all of that. But one day, computers will eventually win out.
(Music)

One afternoon, Michael Nyman welcomed us to his home, in his English garden.
(Music)

With great liberty, the composer mixes minimalism along with rock music, film music with baroque melodies. Nicknamed the Conformist Dandy by his peers, Michael Nyman offered us a piano lesson.