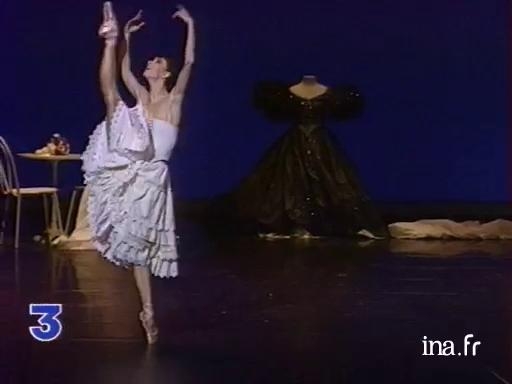 A portrait of Sylvie Guillem on her return to Paris for a show that she would then present in the provinces. Extracts from several of her shows mixed with an interview of the star dancer.

Sylvia Guillem was born in 1965. She practised competitive gymnastics until 11 years old before going to the school of dance of the Opéra in Paris. At 16 years old she was in the ballet corps and two years later she won the gold medal at the Varna competition in Bulgaria. At 19 years old, five days after her promotion to lead dancer, Rudolf Noureev named her star dancer inSwan Lake.

In 1988, faced with the Opéra of Paris' decision to not let her dance with other ballets, she resigned and danced in particular with the Royal Ballet in London, the American Ballet Theatre and the Béjart Ballet Lausanne. She performed under the direction of choreographers William Forsythe, Bob Wilson, Maurice Béjart (who created several pieces for her, likeSissi the Anarchist Empressin 1992). More Recently with the young choreographers Russell Maliphant and Akram Khan, she turned towards contemporary dance. In 1998 she produced for herself her first choreography, the soloClassic Instinct.

In simple performances or choreography, Sylvie Guillem put all of her exceptional physical abilities at their service through her sensitivity and her strength of performance. She has performed on the greatest international stages and has received numerous prizes and honours.

Sylvie Guillem is back in Paris, and after these years in exile, she's presenting a show in Paris and soon in the provinces. A career that was often disconnected from the institutions and an absolutely exceptional presence. Sylvie Guillem rarely agrees to do interviews, Dominique Poncet was able to meet her, and she was willing to give a description of herself, a self-portrait, actually.
(Music)

[Noureyeff] said that she's ingenious. Jeanne Moreau thinks that she has a divine essence, and as for Maurice Béjart, he asserts that with a kick to the stars, she propels us to the future. She's unshakeable and supreme, and she continues to dance and therefore work.

I think that the simplest, the simplest emotions, the simplest gestures are the truest ones and therefore the most attractive ones. And that's why people often thought that I was cold, because there wasn't this whole theatrical side in my interpretation.
(Music)

Classical ballet is all about training, it's a pedestal, it's a school. And it's very important for me to do it regularly, because it keeps me in shape. So it's something worth keeping, that almost let's you feel free afterwards. I would say humbleness and hope. Hope because you can forever try to look further, to always feel like doing things. Instances of doubt are the strongest and times of happiness are also much more intense. So, the times of doubt and anguish become really burdensome, and so we have all sorts of things that pass through our minds.
(Music)

It's true that the stage is something that grabs a hold of you, that's obvious. But you need to know how to get out of it, know how to escape from it. I think that it's even more painful to stay on stage when the stage doesn't want you anymore, than to leave it before it's time.