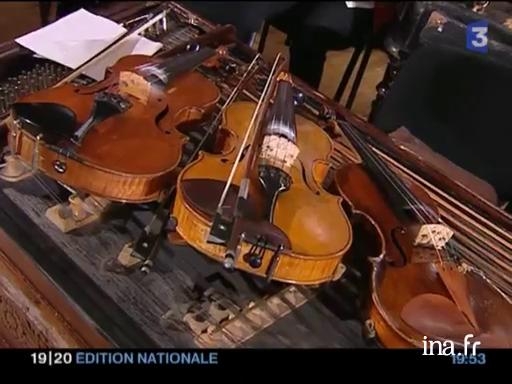 Report shot in Hungary, the home of tsigane violins, on the occasion of the visit in Paris by the Budapest symphonic orchestra's hundred violins. The orchestra plays traditional tsigane music as well as classical music pieces. Distinctive feature: the musicians play by ear, and we sometimes find three generations of a same family within the orchestra.

It was in 1985 with the death of the gypsy violinist and conductor Sandor Jaroka, that Lajos Boross had the idea of creating an exceptional orchestra to honour his memory. This was how the Budapest Symphony Orchestra came about, dubbed "100 gypsy violins" which under the direction of Laslzo Berki soon met with great popular success around the world.

Bringing together the most prestigious gypsy musicians of Hungary, this symphony orchestra, made up of typical folklore instruments like the cimbalom, has a characteristic sound that mixes the immortal repertoire of the great Romantic composers (Liszt, Brahms, Johann Strauss) with traditional folklore airs (czardas) and other original pieces of great gypsy composers (Szentirmay, Monti and Berki).

Since the passing of Laslzo Berki in 1997 the orchestra was placed under the direction of the master of violin Jozsef Lendvai Csosci but never forgot its original mission: to celebrate the festive and melancholic Gypsy soul.

It's without a doubt one of the best tsigane groups, the Hundred Violins of the Budapest symphonic orchestra are giving two rare concerts, tonight and tomorrow, in Paris. The group alternates traditional tsigane pieces and classic works by Brahms, Berlioz and even Bizet. Dominique Poncet, Guy Nevers.
(Music)

For the Tsiganes in Budapest, the love for the violin has been transmitted from father to son since the dawn of time. And with a moving art of interpretation that belongs to only them, and without which Budapest would not exhale such deep melancholy nor such an incredible vitality.
(Music)

What's extraordinary about the violin is that it allows you to express all of your emotions, both your sadness and your happiness. There's no need for lyrics, you can be understood by the entire world.

It was in 1985 that the symphonic orchestra of the tsigane Hundred Violins was created. Sometimes, it would contain three generations of a same family, grandfather, father and son. Some don't even know how to read music, they only play by ear.
(Music)

It's very hard to conduct this orchestra, because all of these musicians are truly pure-blooded. Before each concert, they must be calmed, and during it, they have to be held.
(Music)

On the virtuosos' programme, all of the great classical composers, but also, of course, tsigane music.

We are all very proud to contribute to the fame of tsigane music throughout the world. Myself, I've been in the orchestra since I was eight, and I'm really very happy about that.

Everywhere they play, these tsiganes stir up enthusiasm, and they don't just offer us virtuosity but their soul. That's what's touching.