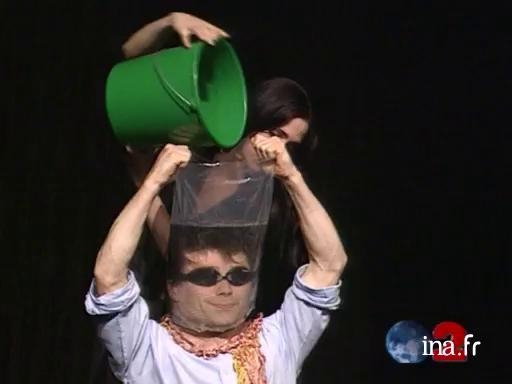 Commented excerpts of Pina Bausch's Nur Du - Only You dance show which is given at the Théâtre de la Ville over the musical theme of the Platters's Only You. Short interview of the choreographer.

Pina Bausch was born in 1940 in Germany. First trained by Kurt Jooss in Essen, she left to study at the Juilliard School in New York in 1958. She danced at the Metropolitan Opera Ballet and that the new American Ballet, then in Germany at the Folkwang Ballett, where she made her own choreographies from 1968. In 1973 she directed the ballet of the Wuppertal Opera. Her new interpretations ofIphigenie auf Taurisand Orpheus und Eurydike shock with their modernity. From 1976 she abandoned conventional dance and developed the concept of dance-theatre internationally. The Wuppertal Ballet became the Tanztheater Wuppertal and finally received recognition in Germany. Bausch, who is "not interested in how people move, but what moves them", developed a language where the dancer, placed in the centre of the process of creation, shows their intimacy. In 1978, Café Muller, a major piece, drew inspiration from scenes lived in her parent's cafe. Taken in a tender or violent fashion, with clear sightedness and poetry, the themes of solitude, fear and communication between men and women are recurrent. The spectator remains marked by the ceaseless repetition of daily gestures, by completely original scene work (like a carpet of fresh carnations inNelken, 1983). Pina Bausch is globally recognized as one of the undeniable characters of 20th-century dance.

The last creation of choreographer Pina Bausch was presented last night, in Paris, at the Théâtre de la Ville. The show's title, "Nur Du" (Only You, in German) was borrowed from the famous song with the same name. Report: Bruno Albin, Maryse Richard.
(Music)

Pina Bausch revived an old Platters hit to speak to each of us intimately. Only you, in German, Nur du. She plays with strong images. Maybe because the tales she tells us cannot be told, they can only be imagined.
(Music)

She wanted the shadow of a forest where almost everything was left to be invented: human beings, fears, laughs. We laugh a lot with Pina Bausch, with laughter that sometimes flirts with dread.
(noises)

A show by Pina Bausch, of course it's dance even if what she expresses is also conveyed by a more theatrical language.

It can be done through dance or through something else that you wouldn't consider to be dance, even if, personally, I think that's what it is. We're free to decide.
(Music)

One of the most beautiful scenes, this unlikely encounter that a dancer works hard to achieve.
(Music)

Pina Bausch shows people that don't know how to embrace each other. Nothing happens. The only thing that passes through the hall is the chilliing but benevolent breath of emotion.
(Music)