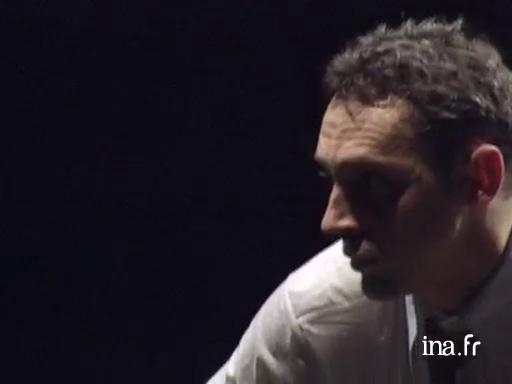 Portrait of Josef Nadj who presents excerpts of several of his choreographies interpreted by his troupe, as well as the Le Cri du Caméléon show which he worked on with the Anomalie company. Comments by the choreographer who talks about the influence of his father, a carpenter, on the themes of his creations (the wood, the table) and on his relationship with the materials.

Josef Nadj is a choreographer, Plasticien and photographer born in 1957 in Yugoslavia. While young he practised drawing and envisaged a career as a painter. It was during his studies of the history of art and music in Budapest that he started out in corporal expression and theatre. In 1980 he left for Paris and continued his training with Marcel Marceau, Etienne Ducroux and Jacques Lecoq. He also took lessons in contemporary dance, tai chi, butoh and contact dance. He became a performer in choreographic creations by Sidonie Rochon, Catherine Diverrès, François Verret and Mark Tompkins. In 1986 he founded his company and his first show,Canard Pékinois, was performed in 1987 at the Bastille Theatre, then at the Théâtre de la Ville in Paris. Since then, Josef Nadj created around twenty shows, all rich in his eclectic education and his Slavic origins, between theatre and dance, real and dreamlike, funny and dark. His path was punctuated by literary influences and homages to authors: Beckett(Le vent dans le sac, 1997), Kafka (Les Veilleurs, 1999), Büchner (Woyzeck, 1994) or Michaux (Asobu, 2006). Since 1996 he regularly shows his plastic and photographic work. In 1995 he was named director of the National Choreographic Centre of Orléans.

From the Balkans, he brought a few friends, a vision of the world that was dark and bright at the same time, an entire vocabulary, really. Josef Nadj was born in Yugoslavia, on a parcel of territory of Hungarian culture. In his search for total, plastic, theatrical, choreographical art, his countryside childhood never ceased to provide him with the tools of language of a man from the woods.

Wood, a very very clean material, very warm and basic, I'd say, has been my companion for a long time. My father was a carpenter. When I was young, I worked with him very much. So the first contact I had with it was through physical work. Which is daily, and I've learned to love this material. Today, obviously, I see it differently. So wood has taken on a symbolic dimension. So, I mentioned several times, in different places, the tree of knowledge, the tree of original sin, which transforms itself, which creates other spaces, sometimes disturbing, sometimes oppressive, sometimes more tender.
(Music)

So, I'd say that the table is the first design that is the dearest to us all, which was also an experience from my childhood, it was my grandfather's table, where he stored his books, on the table. And myself, as a child, I would often come to his home and I would always discover a different book on the table, which would take me on a trip. So for me, it has become the very centre of my thoughts, the starting point of my trip, of my imagination.
(Music)

But the first time, when I tried to change the world, my visions, they came on paper, with pictures as well, and sometimes, I continued with my pieces, to always go deeper with the visual aspect of my ideas, of my designs. So after fifteen years, it was more than necessary to find this relationship with the material, this intimate contribution, and to go deeper with certain shapes, certain ideas, through a still space.
(Silence)

The human body interests me, in all of its expressions, and therefore with all of the body's limits. With them, I gained a bit more space than we did with the dancers and the actors, which we didn't really use a lot. The aerial spaces, the leaps, the juggling as well. So, it's dead space.

For the first time, Nadj will have opened choreography to the art of the runway, with the Anomalie troupe, from the National Circus School.

Caroline Carlson said that Josef Nadj is the genius of the last few years.

I never try to analyse or to evaluate what work can represent. We take what we do seriously and live with it daily, and as for the rest, it doesn't interest us.