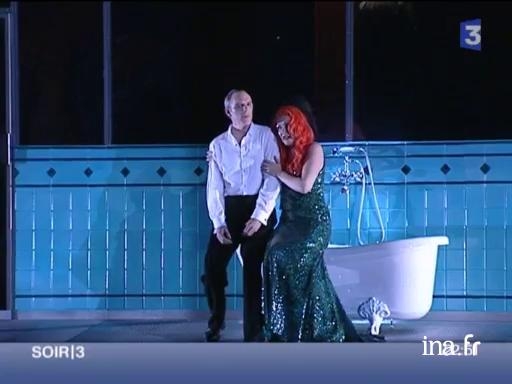 Report on The Makropulos Affair, which makes its debut in the Opéra de Paris's repertoire. Created in 1926 by Chech composer Léos Janacek, The Makropulos Affair talks about the myth of eternal youth. Polish director Krzysztof Warlikowski transposed the action to Hollywood's Marilyn Monroe years.

Born in Hukvaldy in 1854, in Moravia in a modest area, Leos Janacek studied music in Brno, then Prague, Saint Petersburg, Leipzig and in Vienna. He was a teacher and then Professor of music in Brno and he began composing modestly. He became friends with Dvorak, after which he became interested in the natural melody of spoken language. Like Bartok would later do in Hungary, he collected and edited popular melodies and his whole career would be marked by this attention to the inflections of the spoken voice. At the turn of the century his music had a social aspect: struggle against the monarchy and satire of the petite bourgeoisie. But his audience was still limited and it was after the operaJenufa, performed in Brno in 1904 and then in Prague in 1916 that Janacek became famous, at over 60 years old. Masterpieces followed: his piano works, his chamber music, theDiary of one who Disappeared, for song and piano, theGlagolitic Mass, Taras Bulba, theSinfonietta and the operasKatia Kabanova,The Cunning Little Vixen, the Makropulos Case, From the House of the Deadcounted among the indisputable masterpieces of the twentieth century.

Heavy, inventive, powerful, the music of Leo Janacek often has short characteristic motives, taken then altered and integrated into a sort of long recitative whose rhythmic originality is always linked to the spoken word.

...always, opera with a work by Chech composer Leos Janacek who made his debut in the Opéra de Paris's repertoire. "The Makropulos Affair", an opera created in 1926, talks about the myth of eternal youth. And the director had the audacity to transpose the action to Hollywood's Marilyn Monroe years. Dominique Poncet and Guy Nevers are giving us a preview of this show.
(Music)

"The Makropulos Affair" is the story of a woman who chooses to die while at her most beautiful. A woman whose destiny can therefore remind a director of Marilyn Monroe's.
(Music)

It's the weariness of a female star, like we observed towards the end of Marilyn Monroe's life, of someone who gave too much but didn't get back what she wanted out of life. Perhaps it's this feminine side which is never satisfied.
(Music)

However, there's one distinctive feature of the heroine of Janacek's opera: thanks to a rejuvenating longevity potion, she will have lived 337 years, and with several successive identities, she will have driven dozens of men crazy. From this standpoint, "The Makropulos Affair" is the first science-fiction opera. For his actors, because of the musical dissonances, it's as exhilarating as it is complicated to sing.
(Music)

[English] This music is difficult to learn. It's something strange, irrational, not linear at all. There are many feelings to play and to sing. In fact, the music is written around the texts, so if you sing the texts, the music comes all by itself.
(Music)

In this UFO opera, no songs of bravery, just replies and scenes that flow, a bit like in films.
(Music)

We hardly ever knew. We start it and we're on the rails all the way to the end. Yes, I would say: I think that people will be fascinated by this opera.
(Music)

They'll be especially captivated since Leos Janacek's music is sumptuous, both repetitive and Hollywood-like, in short, fascinating.