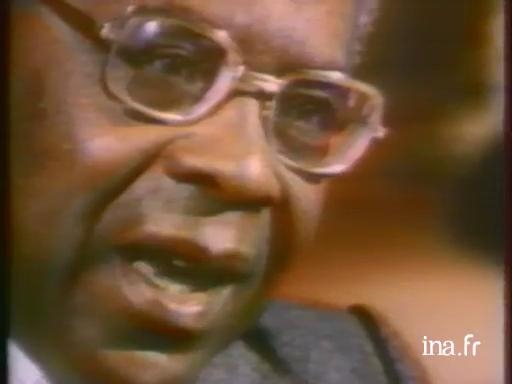 Aimé Césaire, poet and businessman from Martinique, defends the concept of negritude. West Indian society has to accept the heritage of African slaves and be proud of their identity, which is most notably present in the Creole language.

Born in Martinique in 1913, Aimé Césaire arrived in France at the age of 18 years old to follow his studies. While studying at the Ecole Normale Supérieure he founded in 1934 the review "L'Etudiant noir", with among others Leopold Sédar Senghor. He began to write in 1936.

His poetic work would be the cradle of the "négritude" movement. This literary movement, in which we find Senghor and Léon Gontran, called for a black identity and culture faced with the French attitude that was perceived as oppressive. Sartre defined it as "the negation of the negation of the black man". The Cahier d'un retour au pays natal (1939) was written after his return to Martinique. He was a teacher there, as well as founder of the review "Tropiques".

He was also in politics, militant in the ranks of the French Communist Party that he would leave in 1956 to found two years later the Progressive Martiniquan Party (PPM). In 1945 he became the Mayor of Fort de France and deputy of Martinique. His discours sur le colonialisme (1950) explained, in the form of a pamphlet, all his hostility towards European colonialism. He published several collections, La Poésie (1994) would be the last. He died in 2008, and France gave him a national funeral.

One time, when I said in front of General de Gaulle that our history started in the hold of the slave ships, there were apparently some Martinique inhabitants, and similar people, who were totally hurt, totally offended, but that's the first fact. There's If someone should be ashamed, it's those that did the trading, not those who endured the trading. OK! How can we understand Martinique society, if we don't take into account, that it's a colonial and racist society? How can we understand Martinique language, the real Martinique language, Creole, if we don't take into account that it's a language that was made with French words or pieces of French words, but that were restored by throats, according to the implacable r Otherwise said, if we don't want to remain on the surface of things, well then we have to come back to the original fact which is that we're a mix, of course, but that we're Africans from the diaspora.