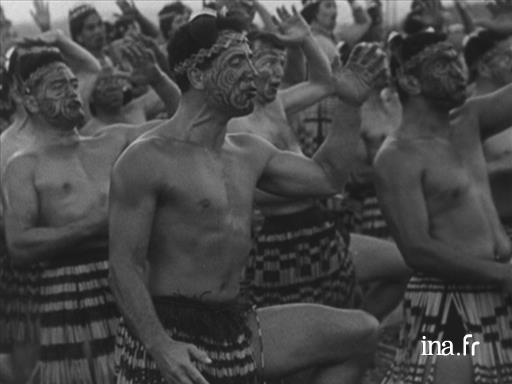 As part of her official trip to the different Commonwealth States, Queen Elizabeth II visited New Zealand on 6th to 18th February. On 6th February in Waitangi on North Island, the Queen and the Duke of Edinburgh greeted the Island's officials before attending a Maori ceremony including a haka performed by warriors.

Hakas have always existed in Māori society. Their beginning can be found in Māori mythology, and they are mentioned in accounts of early explorers. But contrary to what is often said, hakas are not exclusively war dances. A haka is an original creation, a chanson de geste, or an epic poem. A haka is performed to celebrate a person, a deity, a place, an event, or to tell a story, a genealogy, a founding myth, or even to «talk» about a social issue. And so a haka is also performed to welcome guests, as was the case here in 1963 in Waitangi for Queen Elizabeth II. In actual fact, a haka is part of the "powhiri ", the traditional protocol for meetings between two groups. A powhiri is held in the marae, the community house, which is also the centre of social life in a Māori village. As you will hear in the extract, on the day of the visit, New Zealand celebrated the 123rd anniversary of the signing of the Treaty of Waitangi between the Crown and a Māori chief, which is considered the birth of New Zealand as a nation. At the end of the clip, you can see a performance of the "poi» dance, small white balls attached to a cord that women harmoniously and synchronously swing about.

At Waitangi, the first stage on their trip to New Zealand, Queen Elizabeth and the Duke of Edinburgh were introduced to the local high society before listening to 10,000 Maori in traditional dress loudly express their joy.
(Noise)

New Zealand was celebrating its 123 years of loyalty to the Crown; the sovereign, on the eleventh anniversary of her reign.
(Music)