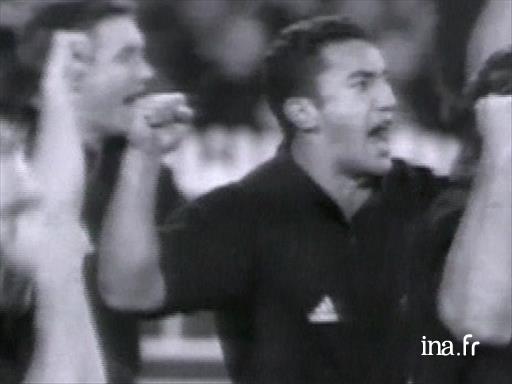 As part of the history of the New Zealand All- Blacks, we are told the story of the haka ritual, commented by Jenny Shipley, Prime Minister of New Zealand.

Far from being a war cry, the haka «Ka mate" is a celebration of life. Why? Because this haka was composed in the early 19th century by a tribal leader called Te Rauparaha to thank another warrior leader called Te Wharerangi for having saved his life after hiding him in a trench of sweet potatoes while he was being chased by enemies, and after asking his wife to sit in front of the entrance to give him magical protection (female genitalia were regarded as sacred and magical in pre-colonial times). This story may seem banal, but it is actually true: in the lyrics for the Ka mate, we can read the anxiety of the author who can hear his enemies arriving in the village where he had taken refuge. He does not know if he will live or die: Ka mate, ka mate, ka ora, ka ora - I may die, I may die, I may live, I may live. Then, on hearing Te Wharerangi send his opponents off on the wrong track, Te Rauparaha thanks him: Tenei te tangata puhuruhuru nana nei i tiki mai whakawhiti te ra - This is the hairy man who made the sun shine again. Relieved, the fugitive can finally come out of the trench: A upane, A kaupae - a step upwards, and then another -before seeing the sun shine again: Whiti te ra.

Even though the story told by this haka is perfectly known, it is still unclear why the All Blacks chose to perform this haka in 1905 during their tour of the British Isles. Clearly, their tour was not a duel nor was it supposed to spur on a warring party before a confrontation. It was therefore to ensure consistency that the Kapa o Pango was composed in 2005.

Talking about the history of the All Blacks is like hitting a wall of history head-on. You have to go to the other side of the world, to New Zealand, the land of the long white cloud. It is based on legend, it is a fable, it is founded on myth and it is an ancestral pre-match ritual, which commemorates the past.
(Noise)

It all started at the beginning of the century, in 1905. After five weeks of travelling, a New Zealand delegation arrived in the United Kingdom, the birthplace of rugby, for a series of matches. The world discovered the haka for the fist time, and the British Isles were annihilated, 33 losses, and only one win. Enthralled by their dexterity and their speed, a journalist wrote the following about the New Zealand team: "they're all backs”. While being printed a typo crept into the first sentence, changing it to "they're all blacks”. It is the small details that make history.
(Noise)

It is one of the challenges we offer, who are you? what do you do? what are you worth? Because we are here, standing strong and proud, confidant. That is what the haka means

Cibi, Siva tau, Sipi tau, other dances of the Pacific