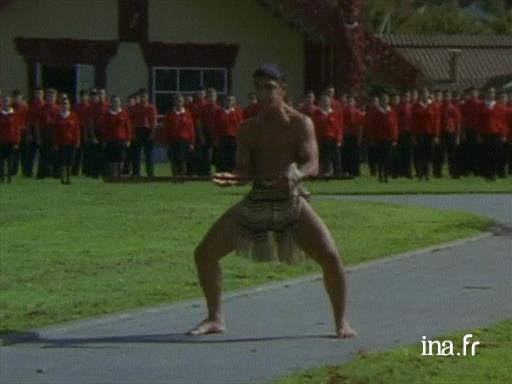 In New Zealand, a rugby match between two schools helps us to get a closer look at the haka ritual. The arrival of the teams, presentation, welcome ceremony, each of these moments are ritualized according to an extremely strict ceremonial.

This clip perfectly illustrates how a powhiri is conducted, during a meeting of two communities at a marae. In this instance, the two «communities» are two high schools whose rugby teams are preparing to compete. It is considered a formal occasion, you will notice the attention that has been paid to the dress, which must be perfect. On one side, there is the visiting team, who is silently moving forward, guided by one or two locals who act as guides. Opposite, the locals have been informed about the arrival of the visitors, and stand in front of their marae, this large house which is the nerve centre of Māori life. Once they are about fifty metres in front of the building, the visitors stop, and a woman from the host community starts singing the «karakia", a lament to welcome and pay tribute to the dead, until another woman of the visiting group answers. Then, the visiting guests then begin their haka.

Generally, each school has its own haka which tells the story of their establishment, or places it within its social and cultural context. The hosts respond by singing their haka, and are then invited to sit on the benches on the forecourt of the marae. The locals deliver their speech, followed by the hosts. Then everyone sings songs, and the members of the two communities stand in a row to greet each other by making a «hongi ", which consists of applying a little pressure with the nose and forehead against the other person's. Once this ritual is finished, the hosts offer a meal to their visitors, and the welcome protocol comes to a end.

Today is a great day. Like every year, the school’s leading team will confront its rival, Napier school in front of the marae (meeting grounds) of the school, all the students are gathered to welcome their guests. But careful, they have not come to shake hands. The perimeter of the marae is sacred, and the ceremonial has been directly inherited from the ancestral traditions of the Maori. Approximately 200 students dressed in their red and black uniform perform their haka as a sign of welcome.
(Silence)
(Noise)

Cibi, Siva tau, Sipi tau, other dances of the Pacific