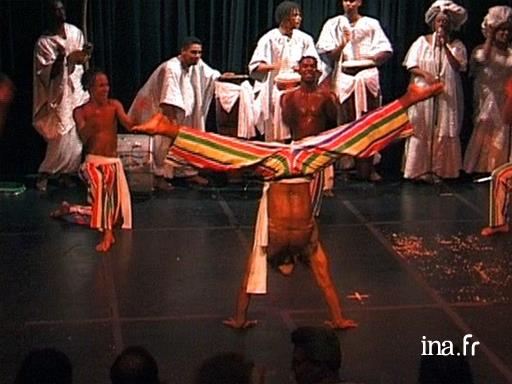 Arrival of the troupe at the biennale de danse in Lyon where they saw a performance of ballet from Bahia: The Bale Folclorico da Bahia. This troupe stages a capoeira dance show, a dance that is similar to a martial art. A dance of African origin, similar to a martial art, brought to Brazil by slaves. The film follows them in their town, Salvador de Bahia.

In Salvador, capoeira was soon to embrace the world of dance. Not so long ago, it was generally considered as a combat sport, as a past-time that aroused suspicion, for poor or black or mixed-race dropouts, whereas dance was an activity for girls of the economic and cultural elite, i.e. white. However, by the 1960s, dance students wanted to learn capoeira. In order for families to be able to accept the situation, they had to get a professor to come to the University. In about 1966, it was José Gabriel Gões who came. José Gabriel Gões or mestre Gato, who, as his name would suggest, was known for his feline agility, and his talents as a berimbau player.

The Bale Folclorico da Bahia Company, which was invited to perform at Lyon's dance Biennale in 1994 and 1996, was founded in 1988. It adopted the traditions of capoeira, as defined by those capoeirists who were involved in show business like the masters Caicara and Canjiquinha and their successors; this was a form of capoeira that was eclectic and gay, which was not afraid of colour and exhibitionism, and was proud to do so, because it knew it was from Bahia, and Bahia as everyone knows, Capoeira is alive in Bahia.

They use the word "Folclórico" in their name, but in France, as soon as you hear the word "folkloric", we think of something old and corny; the word has been so overused that we have completely forgotten its roots. But we should never forget these roots, because the roots of the history of negritude, in Bahia, can be seen in all their works of art, in all the shows that they perform.
(Music)

And that is something I can be proud of in my profession, and in my life: to know that today, there are 30 people living in Brazil, who had a good life in Brazil, because one day there was a biennial event. If there had not been this biennial , I believed that ballet would have ended, there was no support, no financial support. Their coming to the biennial, being noticed by Anna Kisseelgoff, journalist of the New York Times, making the front cover of New York Times, has opened up the doors of the world to them.
(Noise)