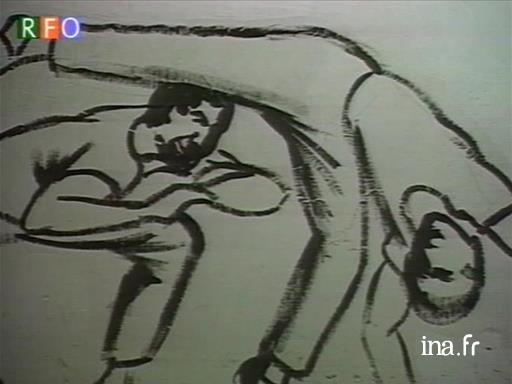 In Bahía, associations including the GCAP looked after poverty-stricken children by encouraging them to engage in traditional dances, including capoeira. This dance, which is of Africa origin, chiefly Angola, often compared to a martial art. It was created by slaves who practised it to the sound of an instrument of Bantu origin, the berimbau. The film gives us a peek behind the doors of a school run by master Moraes, where children practise making the different figures of capoeira and then takes us to visit a musician and maker of berimbaus.

While a modernized variant of capoeira, promoted by Bimba's students, the masters of Bahia like Carlos Senna as well as the county's sports authorities, was dominant in Brazil and is the most exported to other countries, the Bahia-born Moraes, then a soldier stationed in Rio de Janeiro, founded another group in 1980 called the CGAP, which was soon to leave for Salvador. It differentiated itself from the common styles of capoeira; it was decidedly ethnic and combative, as opposed to the predominant idea up until then of a gradual and friendly fusion of the «three races» living in Brazil.

It adopted the yellow and black uniform invented by master Pastinha and promoted the assertion that capoeira was a relic of a game that originated from Africa on board slave ships. First and foremost, the GCAP sought to restore and promote elements that had been lost in trying to turn capoeira into a sport and a form of entertainment, i.e. the slow and clever game with its black style of movements which had nothing to do with the aesthetic of ballet and gymnastics.

Faced with the hostility of the other groups, the renewed capoeira angola demonstrated its vitality by forming groups and trends, and ended up as one of the main styles, which capoeirists from all backgrounds borrowed elements from.

The modern capoeira angola founded by Moraes, Professor of English by profession, is an educational process. As such, it was the subject of several academic studies, in Brazil and elsewhere.

In Salvador, with its population of about 2,300,000 inhabitants, there are more than 15,000 children living on the street and more than 100,000 children who never went to school who make their living off the streets.
(Music)

Drugs have become a real scourge in Salvador Several associations are trying to help these children return to school and their family. One of them, the GCAP, is a school of capoeira, the traditional fight of blacks in Brazil. Thanks to this sport children can acquire balance and learn self-control, and discover their origins.
(Music)

Capoeira has always been a way of resisting. Under the guise of a dance and without ever coming to blows, slaves trained by praticising this strange form of karate from Angola. This fight would allow them to be able to fight for real when it was time to escape.
(Music)

Master Moraes believes that slavery still exists today but has taken on different forms, and that capoeira gives Blacks the means to fight.

Through capoeira, black people can have their revenge on history. When practising it, we begin to discuss how it first arrived in Brazil. We discover that it arrived with the black people who were kidnapped in Africa by colonizers. and that it was these people who brought the capoeira with them on the slave ships. As soon as you start learning this story, you can feel the resistance of the black people In capoeira, there was also the fight for citizenship and freedom.

CGAP etablished itself in the forte de Santo Antonio, a former prison where slaves and political prisoners of the military regime were held at the time. This symbolic location has become the refuge for several cultural associations that are proud of their African heritage.
(Noise)

Lourival, considered to be the best maker of berimbau in Salvador has set up his workshop in one of the former cells. The berimbau is a one-string instrument of Bantou origin. Lourival has seen better days. He is a very good musician, and he left to try his luck in Europe. He now lives here with his son.
(Music)

Some 20 squatters have made this former prison their home: The forte de Santo António is one of the last buildings in the city centre not to have been renovated. The Town Hall of Salvador has threatened to evict its occupants so they carry out renovation work. The capoeira master will not leave without a fight.

We will engage in a political fight to stay here. We will fight. Because a capoeirista, today, is ready to fight using poltics, the physical fight is the last resort.
(Silence)