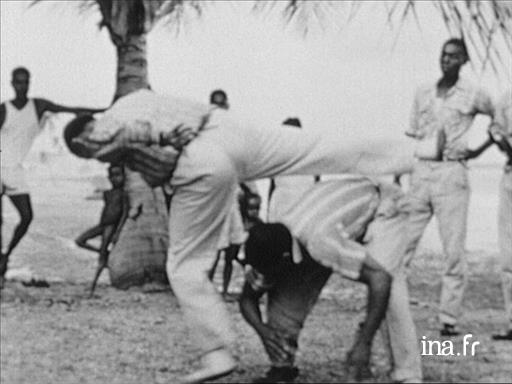 On a beach in Bahia, a group of dancers perform the steps of a capoeira, traditional dance, considered a martial art. Of African origin, (specifically Angolan), the capoeira is one of the cultural foundations of a mixed-race Brazil. A musical group accompanies the protagonists. The main instrument used is the berimbau.

Episodes of Voyages sans passeport present images, accompanied by music taken from discs and a commentary based on notes sent by the traveling cameraman; the producer remained in Paris. The music that accompanies capoeira was recorded by Simone Dreyfus in 1955 in master Waldemar's barracão. This master can be seen in the shots. During the singing used as background music to the video, the two capoeirists are normally crouching at the foot of the berimbau in the position that we saw them in at the beginning.

Waldeloir Rego wrote in his work Capoeira Angola (1968).that the reputation of Waldemar da Paixão was "equal to that of master Bimba" in the 1950s. Born in 1916 on Mare Island, he built his barracão on the fields of Corta-Waro, which the people cleared without obtaining permission in 1938 to build mud and straw houses to live in. The barracão Waldemar is a large straw hut without any interior walls. There he teaches capoeira; all those who feel up to it may come and play. Waldemar preferred slow games, but would not impose his views on his guests. He is also famous for his singing. He proudly talks about his musical innovations: his idea of cutting the lower tip of the berimbau to make it look less like a weapon, and the extended singing before the game.

To wind down after work, the port workers, and the plantation workers came together to dance capoeira. It is an extremely unusual dance, which originated in Angola a long time ago. There are two musical instruments, a pandeiro, which is a tambourine, and a berimbau, a stringed instrument with a sound box, in this instance, a half calabash. An old coin is used to change the pitch, while you strike the steel string with a stick, the Baqueta, to produce a weird sound.
(Music)

There are pirouettes and games, it almost seems to be more than dance, a form of relaxation. It is all done joyfully.
(Music)