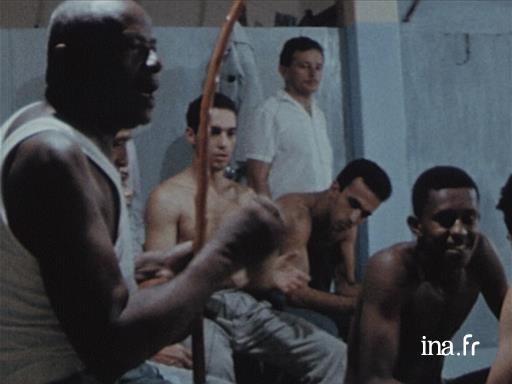 In Bahia, young people follow the classes of master Bimba on how to perform capoeira, a martial art-like traditional dance of African origin, particularly Angola. The figures and moves are performed to the sound of a traditional musical instrument, the berimbau.

When Pierre Kast travelled to Bahia in 1966, the most prominent capoeirista was Bimba, creator of the Luta regional da Bahia, known as Capoeira regional, which he taught professionally to young people who had enough money to pay for the course. A few boys who could not afford the classes were able to attend for free. The style emphasizes martial efficiency. Bimba, an excellent musician, known for decades for his rhythmic style, leads the circle with his berimbau, assisted by a pandeiro player. When putting on a show, he was the only one to mobilize a women's choir, which you can hear on a record made in 1960. The woman's voices accentuated the similarities between the songs used for capoeira and candomble.

Using two different synchronous-sound cameras, the team filmed the «match» that usually took place at the end of the lesson, after adding adequate lighting for the shots in the Academy building. The Terreiro de Jesus district, where the school is located in the historic centre of Salvador. It was abandoned at the beginning of the century by the bourgeoisie who left to live in the modern city which was built on the road leading to the beach. It was a dangerous area with a bad reputation, despite the proximity of the Faculty of medicine.

The second step would present itself almost alone around a narrow street in the [..]. On the first floor, in a very modest house, there is a small room similar in size to a suburban gymnasium for classes given by a retired gym teacher. And yet, it is also a magical place, a class of regional capoeira given by the venerable and wise master Bimba. There are two versions of capoeira, but both are based on the same principle.

Live hidden to live strong and free. Capoeira has all the appearance of a kind of dance, Masters would watch their slaves moving about to the sound of the berimbau, thinking that it was just a pretty dance but it was in fact a form of fight, an organized and deliberate form of combat training, the exact equivalent of Jiu-Jitsu or karate. A form of karate disguised as a pavanne, a forlana or a minuet, performed in front of their masters, who were relaxed and inattentive. Hidden behind a dance is really a violent and effective sport, similar to judo with its own ritual, its precise rules and its secret purpose, with a real combat weapon. In this room, four nights a week, young people, under the guidance of a wise old man, who acts as referee, train to fight using the gestures of their ancestors. There is another version of capoeira. The capoeira.angola, founded by Mestre Pastinha, which was more traditional, more formal, with institutionalized costumes, much more like a dance than a fight. The Capoeira founded by Master Bimba was clearly meant to be played on a daily basis, as a normal sport like French boxing, where the moves are made inside a double circle, they are accompanied by a steady beat produced by the berimbau. The way this sport was practiced by the students of master Bimba was an extremely important indicator, proof that the former African structures have been preserved intact in a longing for freedom and a desire to fight.
(Music)