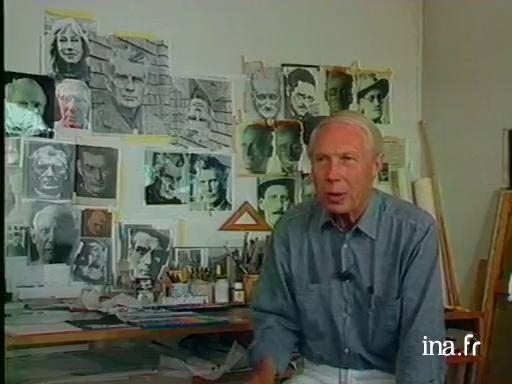 Conversation with painter Louis Le Broquy, who paints portraits of writers, on the occasion of an exhibit at the Picasso museum in Antibes.

If the importance of an artist can be judged by his price on the art market, Louis le Brocquy, born in Dublin in 1916, is certainly one of the major painters of contemporary Ireland. Very integrated in the Irish cultural milieu, he made friends with novelists, Samuel Beckett, Seamus Heaney, as much as with more popular artists as Bono, singer from the group U2. It is often said about Louis le Brocquy that he was a socialite Bacon.

Nicknamed the "civilised head-hunter", he made himself famous by painting a series of paintings that featured a lot of celebrities from the cultural arena, that were inspired by the Polynesian heads in the museum of man in Paris. James Joyce, Francis Bacon, Pablo Picasso and Frederico Garcia Lorca were some of his "cut heads", and represented to him "avatars of human consciousness".

Conforming to the bohemian tradition of the twentieth century, Le Brocquy left Ireland in 1938 to visit the main European artistic collections. His first works were influenced by Manet, Degas and Spanish painting, in particular le Greco, Velasquez and Goya. He then evolved towards Cubism, dealing with solitude and marginality in his paintings. These themes are notably abundant in his series about travelling people and their living conditions, independent but precarious, something he really connected with.

At the Picasso castle-museum in Antibes, Louis Le Brocquy is exhibiting, until 30 September, more than 60 essays and pictures by poets, painters and famous writers. Jean-François Tealdi and Bernard Perrano went to go meet this world-famous creator who has been splitting his time, for over 25 years, between Ireland and the French Riviera.
(Music)

Louis Le Brocquy paints famous men like Yeats, Beckett, Picasso, Joyce or Lorca because, as he says, they're famous but vulnerable and poignant. Born in Ireland, in Dublin, Le Brocquy was influenced by Spanish paintings at a very early age and especially by the gradation between white and grey. Even though he's been working at Carros Village for 30 years, his Celtic ancestors' influence is always present in these faces, which go beyond simple appearances, and seek to reflect the individual's interior. Nevertheless, Louis Le Brocquy has always refused to reproduce portraits now that photography and cinema accomplish this in such a superior way. On the contrary, he prefers to erase outlines that are too familiar in order to unearth the other images that are hidden beneath: that of unusual men.

All of us are so used to the human face. We're so used to see a face as an expression of someone that we all know that, in reality, we don't see, we only see a conception of this view, and not the view itself.

In your portraits, there is one thing that isn't too deconstructed. And that's the eyes.

Maybe that the eyes happen to be the main gateway to the... the main entrance to the soul which... this intangible reality that lurks behind the exterior view of the face.

Louis Le Brocquy, until 30 September, at the Picasso castle-museum in Antibes.
(Music)