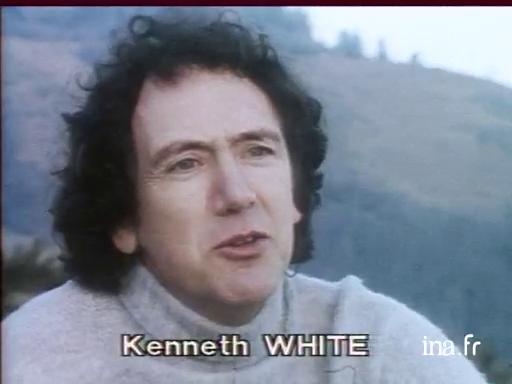 Conversation with Kenneth White, at home in the French countryside. He discusses his works of poetry, his latest book, and his choice to come live in France.

Kenneth White, a thinker and poet born in 1936, started to open up to the beauty of the natural world during his childhood, in a Scottish environment facing the sea and its large, wild outdoors. He studied literature, philosophy and Latin in Glasgow, and then settled in France. There, he discovered surrealists, Oriental beliefs and primitive cultures. An English lecturer at the Sorbonne, he published his first poems in the Wild Coal collection.

Elected as chair of Sorbonne university's XXth century poetry section, he published philosophical stories and poetry, quite affected by the elements and the many trips he made around the world. In 1989, Kenneth White founded the International Institute of Geopoetics. His idea was to mix poetry, biology, ecology, philosophy and self-analysis. A poetic short story would then be possible, mixing literature and sciences. In 1994, he published Le Plateau de l'Albatros, which drew up the first geopoetic cartography.

In 2005, a prolific author, he published, amongst other things, Le Passage Extérieur (a collection of poems), La Maison des Marées (narrative prose) and L'Ermitage des Brumes (interviews regarding his report on the Orient). Today, he attends many university conferences to express his ideas on "poetic intelligence". In 2006, he published Le Rôdeur des Confins, a work that discusses his discovery of territories all over the world.

Kenneth White, a name and a face that's still a quite unknown to most people. Kenneth White is an author, a young Scottish poet, one of the most brilliant ones of his generation. He's been living in France for the last 12 years, and he writes directly in French, just like Ionesco, Troyat and Julien Green. His latest book, "Letters from Gourgounel", is proof. He tells the story of Ardèche peasants. We met with him in Pau during one of his walks through the Pyrenees valleys.
(Music)

Kenneth White is Scottish, a Scottish traveler. When he talks about himself, Kenneth White defines himself as a pedestrian, a passenger, a passerby. A constantly moving vagabond, he crosses all of the borders, from Ireland to the deserts of Africa, from Norway to Spain, from China to the Saint Laurent shores. Voluntarily exiled, he jumps from one culture to another to avoid confinement. He recalls his journeys in a poet's language, even if he denies this term.

I don't like being labeled a poet because of all the connotations, all of the connotations that are associated with this word, know what I mean? What... When one utters the word "poet", what do we mean by that? We hear empty rhetoric, we picture some guy up in the clouds, you know, all sorts of things, so I'd like to rid my activities from all of these connotations. So I say: if someone can remove the connotations from this word, fine, I don't mind being labeled a "poet". but I prefer to use other words and I change my name from time to time. I'm "a wandering Scotsman", I'm "an intellectual nomad", I'm "an Overnihilist", I'm "an extravagant Scotsman", a "transcendental tramp", all sorts of things. Because I'm not only interested in writing poems. I write poems, it's a bit like the spearhead of my work. But I also write prose books, I write books on thoughts, I write theses. It's a mutifaceted and polymorphous activity, isn't it, that also implies a certain life.

Even if its inspiration never comes from news, even if it wants to be free from current times, if he likes the solitude that he finds in the Cevenol mountains, at the place known as Gourgounel, his need to communicate with people and with nature remains solid.

I also have a deep love for reality, the most immediate reality, and Gourgounel, the book I wrote over there, is a book about immediate reality. It's a book about the five senses, it's about the odour of a mushroom in the woods, the crash of thunder, the lightning on Mount Tanargue. A book about sensuality or sensorial impressions. But also about meeting people, the Ardèche peasants. As a matter of fact, meeting people who live a life that's very close to the basics.

Finally, it's not necessary to go very far.

When he's not traveling, Kenneth White lives in Pau, facing the Pyrenees. Right now, he's preparing two books on his drifts across China and Canada, two always complimentary horizons where he organizes his comeback. As a matter of fact, you are a Westerner and you love everything that comes from the East. How can you organise such an encounter? What purpose do they serve, these encounters?

I think that it's something that obssesses Westerns subconsciously since the XVIIIth century at least. A man like Nietzsche said, in the XIXth century, that if we could combine western energy - and I want to keep it - western energy with a sort of eastern contemplation, we would have, he said, the solution to the world's enigma. It might even be more complicated than that. Let's just say that it's something that I'm working on. I don't think that we can understand the need for a way of thinking... a certain eastern way of thinking. For me, it's not about absolute exoticism. So we can't understand the need for a certain eastern way of thought unless we make a profound analysis of western culture. And, for me, it's not all about making Europe more Asian, it's about complementarity, realizing that a link can be made between us, now, and a certain eastern way of thought. Why did you decide to stop in France? Well, I did mention that I'm Scottish, and this is old news. It goes back centuries ago. Back in the XIIIth century, there was already what we called an "Old alliance" between Scotland and France. These two countries were very close, very close intellectually and culturally. In the Middle Ages, for example, students came... They didn't go to London or Oxford, they went to Paris. So there's this old link. And me, well, being a student, I studied French and German. There was a movement toward France, and then, I married a French woman, which only consolidated the images between myself and this country.