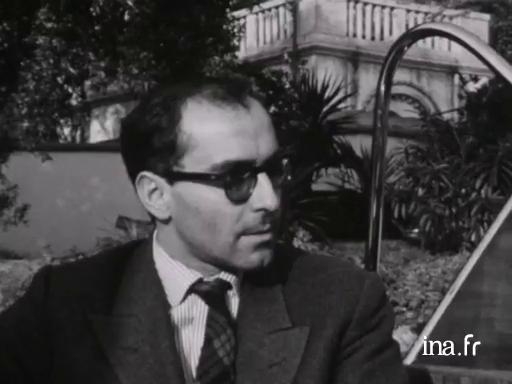 After a brief presentation of Luis Buñuel's Simon of the Desert, Jean-Luc Godard answers Maurice Seveno's questions on the story of Pierrot le fou, the painting theme brought up in the film and his provocative side. Anna Karina then speaks about her role in the film.

In 1965, Jean-Luc Godard, a former critic at Cahiers du Cinéma magazine born in 1930, released his second film of the year and his tenth feature-length film in seven years. Pierrot le fou was shot with Anna Karina, the filmmaker's companion, with whom he already shot five films including Band of Outsiders and Alphaville in 1964 and 1965. The other star is Jean-Paul Belmondo, who Godard brought to the masses in 1959's Breathless and who was re-employed, along with Karina, in 1961's A Woman Is a Woman.

Pierrot le fou remains one of the most dazzling films of the French New Wave. Plots as pretexts, intuitive continuity, provocative quotes, disconcerting soundtrack: the whole thing, wonderfully filmed - in coulour - by chief cinematographer Raoul Coutard, can be seen as poetic Godardian art. The agitated response to the film didn't keep it from reaching the status of cult film over the years.

Godard pursued his career by soon turning to didactic, political and anti-commercial cinema before becoming greatly interested in video and in television at the end of the 1970s.

Here in the Lido of Venice. Without a doubt, I would not like to be in the shoes of the jury at this festival because up until now, we haven't seen much. Only two films stand out, but for various reasons, they have little odds of winning the palm. The first one of these films, Bunuel's Simon of the Desert, Simon the stylist, a magnificent poem, a very nice exercise in style where we find all the themes that are dear to Bunuel. However, we're here in Italy, and you know that here in Italy, people don't really like blasphemy. Therefore, Simon of the Desert will probably be excluded. Also, there's Jean-Luc Goddard's film which was just presented, Pierrot the Mad. First of all, Jean-Luc, is Pierrot the Mad the story of the news brief?

You make Elie Faure speak with his voice. What does this mean? It's been said that it's the history of art.

In the beginning. He reads something about art history, I think it corresponds well with... the beginning of the world... Well, it's a film on painting. Well, not on painting but it's... it's, I think, a film that's more like a painting, I mean, that's more like a landscape like painters would depict, or a portrait that's both a landscape and a portrait. So, in the beginning, I guess, my words were the same as a painter's... I thought he was a tremendous painter, Velasquèz, I am... The comparison is a bit extreme, but it seemed appropriate.

Jean-Luc Godard, do you like to provoke people? And by this, I don't mean this in an insulting manner.

No. We can just as well seek to provoke admiration, astonishment as much as anger.

In the sense of provoking an event, not provoking in the strict sense of the word, I'd say.

Yes, that's right, yes. Well, I mean, you like to surprise people, for example.

Well, no, but if it happens to be that people are asleep and things make noise, well, it wakes them up if they were sleeping. If they were already awake, it won't wake them up at all.

Anna, tell us first about your role in Pierrot the Mad.

It's a rather extraordinary character in the sense that it's a girl that is many different things at once: she's mean, she's vicious, she's romantic, she's sentimental, she kills, in the film and right away afterwards, she lives a life, just like that, spontaneously.

I know that you're quite often the agent of a destiny signed by Godard?

Yes, but here, I think it's a character that is in all the roles that I've done, that is to say, they're at the same time:

A Woman Is a Woman, To Live One's Life, The Little Soldier, Band of Outsiders.