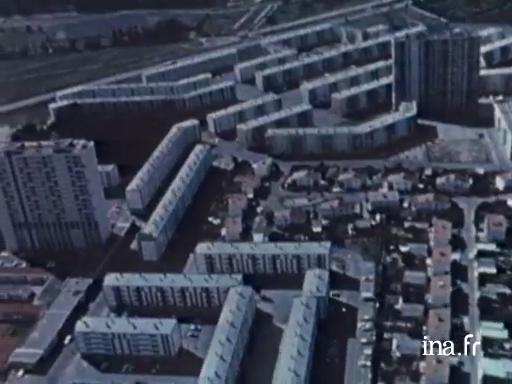 Conversation with Georges Candilis, architect of the Mirail neighbourhood in Toulouse, regarding his intention to build a neighborhood that is neither a new city nor large complexes cut off from the rest of the city.

While studying in Athens, Georges Candilis made friends with Le Corbusier at the 4th CIAM congress of 1933. From 1945, the young Greek architect joined the Frenchman's workshop where he supervised the Unité d'Habitation site in Marseille. He associated with the African branch of ATBAT (Builders Workshop), a centre of interdisciplinary research founded by Le Corbusier, Bodiansky, Wogenscky and Py in Tangiers and then in Casablanca. He met Shadrach Woods and Alexis Josic, young Yugoslavian architects with whom he then opened an agency in Paris. At the 10th CIAM congress in 1953, Candilis, Bakema, Gutmann and Smithson founded Team 10, a group for critical thinking borne of the Modern Movement.

At the end of the 50s, the workshop studied the evolving habitat, adapted to the growth and the changing scale of individual housing. They were to be laureates of the Million Operation competition by conceiving 3 roomed apartments for under a million francs. They developed "habitat au plus grand nombre", housing buildings in the form of a walkway tripod, encouraging meetings by raised walkways for pedestrians while vehicles remained on the ground. Amongst their numerous large-scale projects to be noted are the extension of Bagnols-sur-Cèze, the Mirail in Toulouse and the Free University in Berlin. From 1969, the father of planned urbanism worked alone on the planning of tourist sites, housing and schools in the Middle East.

Due to lack of space, the town centres have no room for new inhabitants, unless these ones are demolished in order to rebuild new ones. Demolish Toulouse, capital of the Occitan territory, surely not. What can be done? Let the town go beyond its borders, spread into the countryside? Allow anarchic and uncontrollable suburbs? Surely not. Well, while flying over Toulouse, Candilis Georges, architect in charge of the Mirail, explains how we are rethinking town planning. Not just to think about accommodation or leisure or work, but to build a new town.
(Music)

We are here in the centre of the old town, you feel, you are conscious that the architecture and the urban structure, is the same thing. Today this urban structure is ill. It has been overrun by cars. But nevertheless people can live here. It has all the activities required for urban life. From the moment you get out of these old historic centres, the breakdown is complete. And so, you pass beyond the limits of the old town, and from the moment you cross that, what do you see? The old and the new, one next to the other, with no unity at all. There the elements are isolated, juxtaposed, one disrupts the other, the old is crushed and the new is diminished. This image, you find it everywhere, not only in Toulouse, not only in France, not only in Europe, throughout the whole world. It's a phenomenon of the 1940's, 50's and 60's. To start with you find it normal. You say that's how it is. It's necessary to give it its dignity and its place in modern society. At this moment we are passing in front of a high-rise complex certainly carried out with great awareness and great effort. But it's a question of a row of houses, in the city where the roads have been drawn, but in reality these are not roads, this is traffic. This massacre was necessary in order to understand that the time has come to change it.

Change it to what? For some time people have talked a lot in France about new towns. And of building a town there where nothing exists is not science fiction, but already history. Think of La Roche-sur-Yon, built from nothing at Napoleon's will. For the town planner, the new town is not a high-rise complex, it is no longer a new district which remains linked to a traditional centre, it's something else. And even if you reject the term, it's still a new town that Candilis Georges created at the Mirail.
(Music)

We tried to make a district of Toulouse. That is, neither a high-rise complex nor a new town. Because both have become a bit pejorative. High-rise complex makes you think straight away of segregation. New town makes you think straight away of science fiction. So this is neither one nor the other. Toulouse, a large city like all other large cities, but maybe Toulouse is stronger than the others. It needed to be extended. Toulouse Mirail is no more than a district which is a consequence of the growth.

But a district which is organised with centres of interest, shops, etc., something very different to what you might imagine.

But maybe because we are corrupted, districts of towns are never isolated districts. The isolation of districts, the famous suburbs, are really a recent phenomenon. A town, a nice town, has districts which really used to be centres and not dormitory suburbs. So that's what you want to do, what you try to do. I have not outlawed cars, I have tried to put them where they deserve to be. I can't accept that all our town plans mainly concern cars and not people. You see, when you start to draw roads, you think of cars, you don't think of people. Cars have overrun our daily life. It's unthinkable, and we are practically defenceless. So in the new constructions, it is necessary to anticipate the cars' place, and in particular give people their place. So I am really aware of the weakness of this construction. Because you can honestly say that what has been done during these last years does not correspond at all either to people's aspirations, or to progress or new conditions which allow us to do things better.