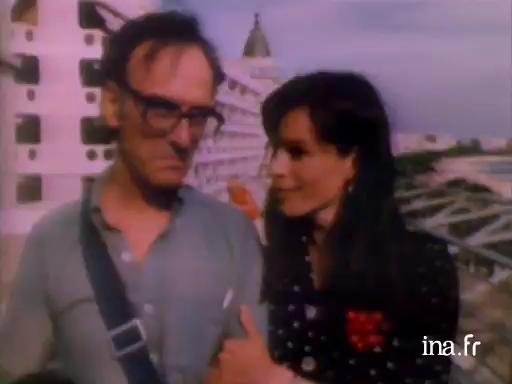 While strolling on the Croisette, the director Carlos Saura and his muse Geraldine Chaplin talk of their film Cria cuervos, presented in competition at the Cannes Festival. Carlos Saura explains that he wanted to deal with the theme of the Spanish family, influenced both by religion and Francoism.

At the heart of Spanish filmmaker Carlos Saura's art (born in 1932), an innate sense of metaphors and ellipses allowed him to realise the extent of the oppression of years of dictatorship without being subjected to exile.

A photographer at first, and then a student at the Institute of Cinema Research and Studies, the director used the theme of memory while contesting the conservative values of the 1970 pro-Franco society. The Garden of Delights (1970), Ana y los Lobos (1972), La Prima Angélica (1973) foretold of the international success of Raise Ravens (grand Jury Prize in Cannes in 1976). The film benefits from astounding performances by Geraldine Chaplin - Saura's mastermind, who will have acted in nine of his films - and little Ana Torent playing the role of an orphan haunted by the ghost of her mother and haunted by the song Porque te Vas.

No never. I'll never make an autobiographical film, no never because I detest them.

There are, there are little pieces of life, there in each film, but only...

You didn't kill your father did you, I know that.

Yes, what do you think of the Spanish family?

I think that the Spanish family is very similar to the family in many countries. It's almost the same thing, but one thing is true, that's that the religious education is very strong, especially in fathers, in fathers and mothers, and especially I believe what's very important, is that Francoism is an important characteristic.

Not family, relationships between the family and the man.