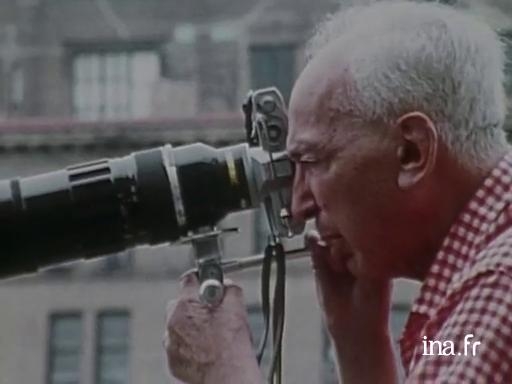 Born in Hungary in 1894, André Kertész bought his first camera at 19 years old and began to take pictures with no training: street scenes, family, soldiers in the army where he was mobilised. His first photos were published in Hungary but his collection of Hungarian negatives were destroyed in 1918.

At 29 years old, he moved to Paris where he would meet surrealists and Dadaists without necessarily adhering to these movements. To him we owe, during this period, portraits of artists, still life and compositions. He worked for numerous magazines and reviews and was noticed for a series of nude photos, taken through deforming mirrors, titled Les Distorsions.

In 1936 he left for the USA, lived in New York where he continued to work for the press, took American nationality but lived through hard times and felt misunderstood. It was only from the 1960s that he was really recognized, exhibited and rewarded in Venice, Paris, New York, Stockholm, Budapest, London, Tokyo... at the time when he dedicated himself to photography for his own pleasure. Before dying, at 91 years old in New York, he gave all his negatives and correspondence to France.

Andre Kertesz, 83 years old, one of the big names in the history of photography, started in Budapest in 1912. In New York where he has lived since 1936, today he celebrates 65 years in the industry
(Silence)

Washington Square, one of the quietest districts of New York, near Greenwich Village.
(Silence)

From his terrace on the 12th floor, Kertesz Andre is at his look out post.
(Silence)

I live high up and I see everything. I am just above the trees, so during the 25 years that I've lived in this apartment, naturally I have seen all the rooms. I photograph the changing windows, [not understood] source. It's really very beautiful.
(Silence)

Now I wait for someone on the, in the photo, I have an angle, yes that's it, I wait Whether someone will come wandering
(Silence)

You wait for someone to come into your field?

Yes, that's it. She has her back to us now, I really want her to turn round, but I don't want to ask so I wait
(Silence)

Do you have to wait a long time sometimes?

Do you have to wait a long time sometimes?

And you wait as long as necessary?

Yes, I wait just here, just as long as I need, so I wait if someone accidentally comes or not, if not I don't do it.