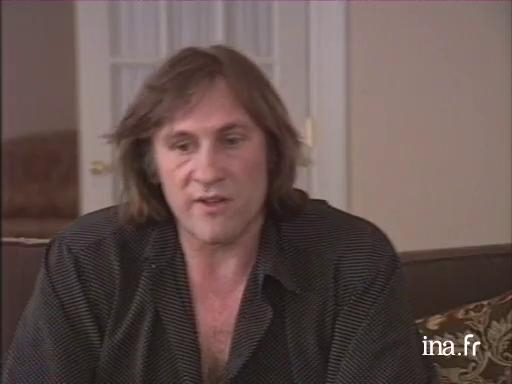 Gerard Depardieu answers questions from Jean Pierre Lavoignat about his role as Cyrano and in the film by Jean Paul Rappeneau.

Gerard Depardieu, born in 1948, started in the cinema in 1971 in Le Cri du cormoran le soir au-dessus des jonques by Michel Audiard, (1971), and then in a film by Marguerite Duras, Nathalie Grangier (1972). But it was Les Valseuses by Bertrand Blier, the following year, that would reveal him to the public.

During the prolific 70s, he left the life of a petty street criminal to perform one in Loulou by Maurice Pialat. Ten years later, he took it easy and chose to alternate between light comedy (notably by Francis Veber) and more serious films (Alain Resnais, François Truffaut, Maurice Pialat).

The incarnation of French colourfulness at the end of the 80s, he renewed the role of Cyrano de Bergerac in 1990 at Anne Brochet's sides and won the male performance award at the Cannes Festival. In the wake, he performed the great names of literature like the Colonel Chabert in the eponymous film by Yves Angelo. A departure for Hollywood and his participation in the French super-productions like Astérix at the end of the 90s confirmed his status as a star but distanced him from more serious cinema.

Gérard Depardieu, who, as I mentioned earlier, is now in New York, and will now speak to us about his role in "Cyrano de Bergerac". Jean-Pierre Lavoignat asked him if it felt like a massive adventure to him, let's listen to Gérard Depardieu's response.

I get the impression that I've been preparing for it for twenty years. In the end, it was truly something that was inside of me every day.

In terms of desire, in terms of desire and of this communication. And I think that it's the most beautiful synthesis of communication, Cyrano I mean. It's the love that we all have inside of us, that comes out or doesn't come out, I mean, that exists, that is there, you know. It was magnificent to have done it like that at this age, at this turning point, with the energy that we had around us. There are actors that can find roles, but as for the roles, there are actors that are waiting for the role, and that, that isn't normal. I think that when you're an actor, you have to decide to get your ass in gear, and the actor is really the "piece of cake", you see. It's really the slice of cake that you have to quietly eat afterwards. But at the same time, actors are the ones that provoke people. But when you want to play a character, well then, you have to put everything in motion to try to convince others.

Don't you think that, I think that it was Simone Signoret that said that the distinctive feature of an actor is to be desired, so it isn't up to him to make himself...

That was perhaps during another time period when things were easier, when the cinema was less expensive. But nowadays, I think that you have to sell your desire first, and then you have to be strong to still try to desire. There is also the strength of Cyrano, which is because Rappeneau also wanted Cyrano for forty years. So, at one point the opportunity arose, and his desire was intact. Because if after forty years you realise that the desire is low, then things are hard.