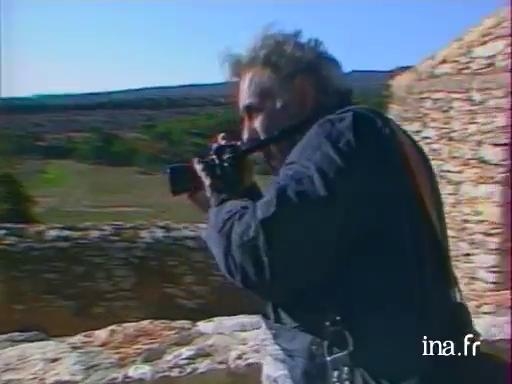 Report from Provence, at the home of photographer Hans Silvester, who is a pigeon enthusiast that both raises and photographs them.

Hans Silvester was born in Germany in 1938. At 14 years old, he took his first photographs using a camera given to him by his parents.

From 1955, having graduated from the Fribourg school, he crossed Europe and took a liking to reporting with a focus on animal and nature discoveries. Particularly impressed by Provence, he moved there in 1962 and came back there from time to time between his many trips around the world: South America, Central America, America, Japan, Portugal, Egypt, Tunisia, Hungary, Italy, Spain.

In 1965, he joined the Rapho agency. Cats, dogs, pigeons, Camargue horses were the subject of his publications but he didn't define himself as an animal photographer as such. He preferred to call himself a "nature photographer" and became in 1980 quite a militant ecologist. He also presented work on the national parks of Europe, and Amazonian deforestation. In 2006, after having observed them for many years, he published a work on the Ethiopian Omo valley people.

Right now, we're going to talk about someone you like very much, because you're the ones who asked us to talk about him, but it was a great pleasure for us to do it. We're talking about Hans Silvester who is with you at the Rapho agency, who is, himself, one of the biggest artists of coulour. For you, it's black and white. Furthermore, he likes birds, he likes animals, he likes nature. And Henri Bodiguel and Robert Rosier went to his small refuge in Provence, to talk to him about pigeons, animals and his art. We listen to them and watch them especially.
(Noises)

Ever since I was a kid, I've always... I had a passion for pigeons. So I really wanted to have pigeons. I couldn't because I lived in social housing where you weren't allowed to have pigeons. So, by coming to Provence, right away I took advantage of the room and of the countryside by having pigeons. I realise that there are many things to show as far as form, as far as movement, as far as coulours, as far as attitude, the different races and all that. It's really fascinating.
(Noises)

When talking about you, can we say that you're an animal photograher?

Yes and no. It's true that I've taken lots of pictures of animals, but I don't feel like someone that's only specialised in animals. Let's just say that I do nature, rather, where animals are a part of it.

How do you define the role of the photographer? Do you have, yourself, a definition of this profession?

Well, one time, I feel a bit like a witness. That is true. And besides, for me, it's really a form of writing. I observe things, they can be beautiful, they can be ugly, but I try to photograph them. For me, it's a form of language.
(Noises)

No news at all. Atmospheres, for sure, but sometimes, they can become news. I've photographed environmental problems and all of a sudden, they became news.