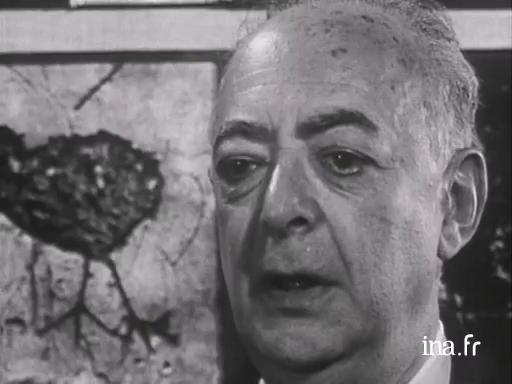 Interview with Brassaï on the subject of his pictures of night and graffitis. He tells an anecdote about a graffiti that Picasso made on a Parisian wall; someone cut out the wall to recover this "work". He talks about his way of photographing portraits, by asking those who are posing for him to look at him with an intent look.

Born in 1899 in Brasso, in what is today Romania, Gyula Halasz or Brassaï, made his first trip to Paris in 1903 - 1904 with his father, Professor of French literature.

Back home, he studied painting and sculpture at the Academy of Fine Art in Budapest. He moved to Berlin in 1921, where he met Kandinsky and Varèse. But it was in 1924 that he made his dream come true: to live in Paris. There, he frequented the circle of poets and writers (Michaux, Queneau, Desnos, Prévert...), he began journalism and photography and took on the name Brassaï, after his birth town.

From 1930, he began photographing gardens, streets and walls in Paris with their misery, graffiti and their nocturnal images. But he also made photographs of high society and portraits of his artist and writer friends.

Brassaï's talents are plenty: painter, drawer and sculptor, photographer and filmmaker (Tant qu'il y aura des bêtes, 1954) and writer: he published numerous books and articles. Considered as one of the greatest photographers of the twentieth century, he died on the 8th of July 1984.

Brassai, we can say that you've been the photographer of Paris's walls. How did you get so interested in all of these graffiti that made you so famous, in addition to all of these other activities?

Well, I often walked through Paris and I often observed the walls and I thought that everything that takes place on the walls is very interesting.
Isn't it?

There are even cracks in the walls, and there are graffiti that people secretly painted there, and I started taking pictures of these things as of 1930-1932. I had little notepads on which I wrote down the addresses, I could follow their development, because it was a collective work, there were many other people who painted and continued a graffito.

And they say that Picasso followed many of the graffiti artists.

In fact, Picasso himself really likes them, he's done graffiti, In Montmartre, many of them, and he told me, in a bank, one day he was waiting, he found, he made a graffiti, on a wall, and then the manager found out that it was a graffiti by Picasso, so he had the wall taken apart, and now it's in his apartment, along

And did you also follow the ageing of the graffiti?

I've followed the ageing, there are graffiti that I've taken pictures of with 10 year intervals, and there are even some in this very exhibit.

Along with the contrasts and the two oppositions.

Well, it changes everything, it becomes a different personality, over a certain amount of time.

Very nice, but now, tell us about the portraits, the portraits of the famous people, you have a very personal technique, I think that it's the picture...

Personal technique, no, but it's just, I like, you know, natural stories, and posing. These are rather bizarre things, meaning, to me it's [pensive], because when a photographer takes someone's picture, the natural knows that he's looking at you and that he's concerned with what you are doing. When you say: act as if I weren't there, that's acting, isn't it. So it's the opposite of the natural, he acts as if you're not there but he's still posing. He poses in a different way, it's hardly natural, you know, I personally like it when people really look at me because it's natural, the situation of a photographer that's taking someone's picture. In addition to that, I can capture the look, which, in a face, is the most important. And, second of all, there is a sort of solemn solitude. When one is looking at the lens, you know, it's almost the sculpture, it's almost, one becomes like marble, and in my opinion, I think that's the portrait.