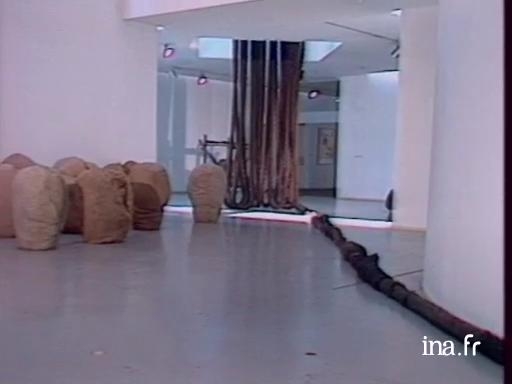 Portrait of Polish artist Magdalena Abakanowicz who is exhibiting her sculptures at the museum of Modern Art.

Born in 1930 near Warsaw, Magdalena Abakanowicz sculpts and paints the human condition and its fragility, by a monumental series that develops the theme of the container. The anonymous carnal container in series likeAltérations(1974-1975) arranging hollowed human silhouettes, orRagazzi(1990), removed "skins" of young boys. Invertebrate containers in theAbakanesthat would secure global success in the 1960s. Derived from her family name, these suspended supple shapes evoke immense chrysalis' that could release monstrous butterflies. Developed in black, brown, red, the author speaks of them as "magic, complicated, enormous shapes".

Magdalena Abakanowicz's dark vision is that of an artist who grew up during the war in a country invaded by Nazis who created the biggest Jewish ghetto there, a symbol of the dehumanisation of the contemporary world. The vision of an artist who, after studying at the Academy of fine arts in Warsaw, had to create in the controlled and severe environment of the Communist regime.

Let's now take a detour to the limits of sculpture and politics through a visit with a Polish artist who obtained an exceptional one-week visa to present her work in Paris. Her name is Magdalena Abakanowicz.

Much more than a simple exhibit, the work presented is testimony. The forms exhibited are, according to the artist, successive skins that she gets rid of by marking off the stages of her path, successive skins, or mouldings, to be more precise.

I did a moulding of a man, you know. And then, when I did the positive of the moulding, I discovered that without movement, our hands don't explain anything, that to find a form that expresses enough about the man, I can remove details from the body. The way that I used the matter is different. This one, it's only in certain uncovered parts. It shows his interior. This one shows it even more here, let's say that the interior is almost completely covered.

This injured man, these objects, inert structures, do they reflect a crisis of conscience? Without getting into politics, can the events of a deeply distressed country influence the work of an artist?

The work was created beforehand. Because, you see the dates? There are cycles in which I worked for 4, 5 years here. In addition, I have to say that inspiration doesn't really come from outside. Maybe in a certain sense, but it is, before anything else, elaborated inside of us, by our intuition, by all of our feelings. And then, all of a sudden, we see something, we discover something. Then, we can say: this thing inspired me. We found it, we did. The exhibit, it talks about man, about solitude, about problems in the entire organic world of our planet which we also belong to.

The multiplication of mouldings is designed to give the impression of a crowd. For once, the artist didn't place them in a circle, letting them communicate between each other. Here, placed against the wall, they're waiting to be placed in a circle to resume their imaginary dialogue.