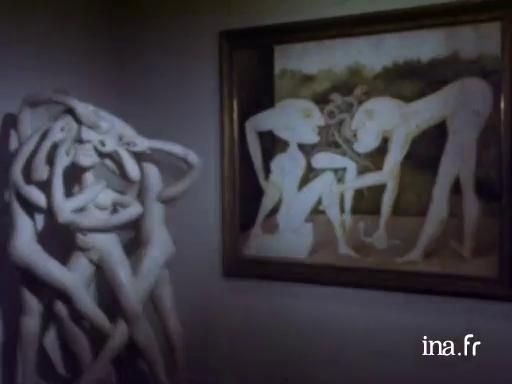 A Romanian painter (1903-1966) established in Paris between the two wars, the life of Victor Brauner is in the image of his works, abundant and anti-conventional. It was punctuated by romantic episodes, Spiritualism séances from a Moldavian childhood, passing by French bohemianism with the surrealists - which would cost him an eye during a fight in 1938 - to clandestine living in Provence with René Char during the occupation.

Influenced by Klee, De Chirico and Picasso, Brauner mixed into his paintings social critique and the derision dear to Dadaism, the fanciful universe of surrealists and almost childlike references to the arts premiers. Close to Tanguy, Giacometti and Breton, he was part of the large Romanian community that came to breathe the Parisian Zeitgeist, as the European intellectual and artistic capital. Constantine Brancusi, Emil Cioran, Mircea Eliade, Eugene Ionesco and Tristan Tzara in particular were also there.

If Brauner used different techniques in his paintings, he distinguished himself by using smoke and wax, makeshift materials that he kept from his period of forced reclusion during the Second World War.

At the National Museum of Modern Art, a big event: the first Victor Brauner retrospective which we owe to Dominique [Botzo].
(Music)

A few rare exhibits over the course of his life weren't enough for us to realize the complexity of his work, which is so abundant and poetic.
(Music)

Brauner was born in Romania at the beginning of the century. As a teenager, he was already painting. Curious of all trends, he interested himself in surrealism, and adhered to it in 1932. He freed himself from it in 1949.
(Music)

Discreet and solitary, the painter wrote: "It's triumphant that we haven't been submerged by a vulgar fame which removes the mystery from a work that grows through its secrecy".
(Music)

Secret painting, enigmatic painting where the subconscious is an important part.
(Music)

Premonitory and symbolic images, that illustrate his painful and often terrifying obssessions.
(Music)

Exhausted by illness, Brauner paints a final series where his sensitiveness and his humour burst out.
(Music)