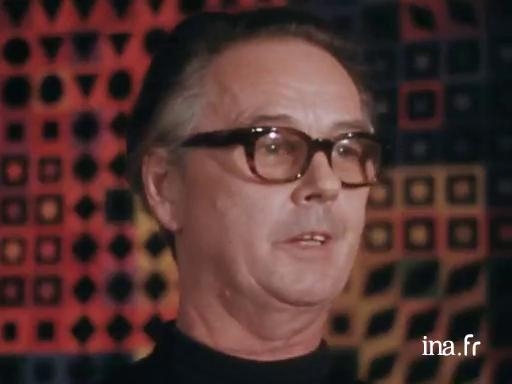 Mrs. Claude Pompidou inaugurates the Vasarely museum in Gordes, followed by Vasarely who explains the confrontation between his works - very modern - and the location that houses them - a medieval fortress.

Painter and designer of Hungarian descent, Victor Vasarely (1906-1997) is considered as the father of Op Art - optical art. In the 1930s while working in Paris as an advertising graphic artist, Vasarely began to take an interest in the deformation of lines and in series work. First figurative, these works would evolve towards abstraction, optical effects and geometric permutations to develop in the 1950s into the hypnotic undulations which characterised it.

He worked from then on the elaboration of a plastic alphabet, bringing up to date the utopia of an advanced universal language at the start of the century by abstract artists. Based on play between combinations of signs and colours, this method allowed him to develop his works infinitely. Vasarely would see in these "multiples", on which numerous collaborators worked, a form of social, reproducible pieces that were accessible to all. These kaleidoscopic images giving a troubling relief to flat surfaces were to achieve international success at the height of the psychedelic movement in the 1960s. Some would see in them an artistic translation of hallucinogenic visions tied to LSD.

And in Pompidou's France which was awakening to contemporary art, Vasarely created his foundation made up of the educational Museum of Gordes (1970-1996) and the architectonic centre in Aix en Provence (1976).

The Gordes castle will no longer be a relic from the past, but a museum of modern art, for today at 5pm Mrs. Pompidou opened the new Victor Vasarely museum.
(Silence)

For Vasarely, the opening of the Gordes museum is the first step towards the completion of his grand project: The Vasarely Foundation. The ten year dream will soon take shape. Creating an artistic research workshop where architects, painters, sociologists, psychologists will debate. A social art according the human environment will be born out of these debates.
(Music)

The Gordes castle, medieval fortress, restored under the Renaissance will, from now on, house the complete works of the master of Op art. Some could be shocked by this mixture of styles, so we asked Vasarely whether it was possible to marry his optical universe with an ancestral place.

Ah! That's a good question that you've asked me regarding the marriage of the two styles, I believe that I don't have to worry about that, it's the public who will judge. Will they be happy, how do I say, to see an ultra modern work in an ancestral place. Besides, what is important consists more in the educational exhibition of the work and not finding harmony which is always very difficult and which was not the goal on which this first phase of the project is based.
(Music)